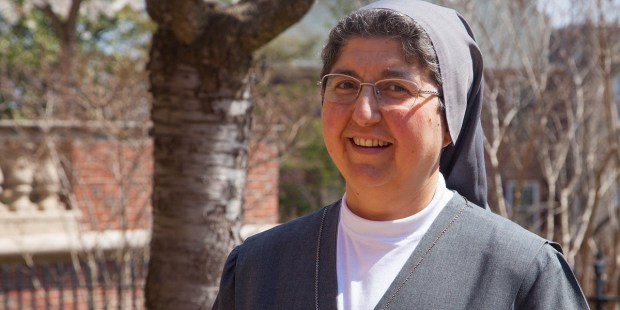 The Salesian nun runs a school for thousands of students. Ninety percent of them are Muslims

“Smiling while being bombed takes courage,” said Sister Carol Tahhan Fachakh, a Salesian nun born in Aleppo 46 years ago, to L’Osservatore Romano. In a meeting with Pope Francis in Rome, Sister Carol — the daughter of an Armenian woman who fled her country to keep her family from being slaughtered — explained both her mission and her “love for Syria” to the Pontiff: she’s a chemist who discovered her vocation while helping disabled children in a missionary experience (led by the Canadian Catholic philosopher and theologian Jean Vanier) among refugees in Lebanon, in the Bekaa Valley. Years later, she became the founder of a school for thousands of students, 90 percent Muslim.

In their school, Sister Carol explains, “we welcome everyone with open arms, like a big family, the Salesian style, trying to overcome, together, the fear caused by missiles and bombs.”

As reported in L’Osservatore Romano, Sister Carol has just received the International Women of Courage Award at the Department of State in Washington, from the hands of U.S. First Lady Melania Trump. Sister Carol joined 12 other “brave women who carry out their mission in dangerous areas, showing courage, strength and leadership while promoting peace, justice, human rights and the dignity of women, often at great personal risk.”