The Holy Sepulchre: Archaeology says the Evangelists were right

What the opening of the marble slab of the Edicule revealed

On October 20th, 2016, one of the most exciting events in centuries took place: the opening of the marble slab guarding the place tradition claims was the tomb of Jesus, inside the Basilica of the Holy Sepulchre in Jerusalem.

Underneath that slab there was a second slab, also of gray marble, containing a slit along its side and bearing a Lorraine Cross. Most likely, this is from the time of the Crusades, from the beginning of the 12th century.

Once the second slab was removed, the surprises began, according to testimonies gathered from different sources. Right below this slab, a fundamental piece of the site was discovered: an ordinary stone bench excavated in the rock that is directly connected with the vertical wall, also excavated in the rock behind it.

The chronicles of medieval travelers such as Félix Faber (1480), who saw the edicule without the actual covering marbles, testify that the bank and wall formed a single piece of stone. This corresponds to the northern wall of the small room: the place traditionally venerated as Jesus’ tomb.

The second surprise revealed the south wall of this room corresponded to a second vertical wall, also made out of ordinary rock, about two meters high. In sum, the Edicule of the Basilica of the Holy Sepulchre contains a site consisting of two stone walls (north and south) and a bank (to the north side) — all dug out of the rock. This setup corresponds to a “sepulchral chamber” one could only gain access by going down, as it was below the level of the outer land. The original stone floor of the tomb, still to be discovered, is to be found under the present marble pavement.

The archaeological elements described agree with the documentary data of the Gospels, as in Matthew 27, Mark 15-16, Luke 24, and John 19-20. That is why it is legitimate to suppose that this is in fact the tomb of Jesus.

Relatively close to the place in which Jesus was crucified, Joseph of Arimathea owned a tomb, which had not yet been used by anyone. (Jewish burial customs at the time usually dictated quick burial in a shallow grave covered with stones for the poor, with the wealthy purchasing family tombs, or sepulchres, where bodies would be laid in niches carved out of the walls. There were also stone benches for the preparation of the body or for visitors to the family tomb.) This tomb was to be closed with a large stone that had to be rolled over in order to cover the entrance, according to the Gospels. This kind of closing is precisely the one that was used for sepulchral chambers, commonly carved in the rock, as the one discovered under the Edicule’s marble slab. One could only walk in by slightly descending to gain access to the place in which the corpse was deposited: that is to say, the aforementioned stone bench. The Gospels claim that Mary Magdalene “bent down to look into the tomb.”

The stone bank is also mentioned in the gospels of Mark and John. In Mark 16:5, it is said that the women entered the tomb and found “a young man seated in a white garment.” Evidently, one could only sit on such marble bench, and not in a niche. John 20:12 one speaks of “two angels dressed in white, sitting in the room [that is, again, the area of the bench] where the body of Jesus had been placed.”

When Jesus was buried, on a Friday, right before the sunset, they did not place the body in a niche but rather on the stone bench, as mentioned in the Gospels. The reason for this decision is that Jesus had died after considerable physical aggression, and his body was in an unfortunate state, and needed proper preparation, which could not be provided at the moment, as the Sabbath rest was about to begin. It was customary among the Jews of the time to wash and anoint with aromatic oils the bodies of the deceased before burying them. But as Jesus had to be buried in a hurry, his body was left on the stone bench, covered hastily with a shroud.

Even if faith in the Resurrection might not lean on logical demonstrations, it doesn’t imply a leap into an irrational vacuum either. Research shows archaeological data and the Gospels agree. The archaeological facts are not to be understood as demonstrations that ground (or not) what is a matter of faith, but they indeed stimulate reasonableness, based on verisimilitude.

The canonical gospels are indeeddocuments belonging to the first centuries of Christianity, and can be read like any other ancient historical document. From them, a religious revolution sprang out: the one that began on a bench dug in the rock, inside a sepulchre, in Jerusalem, two thousand years ago. 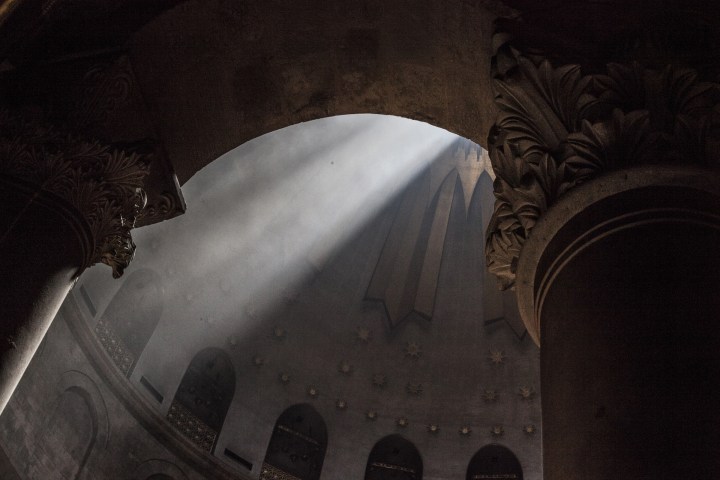