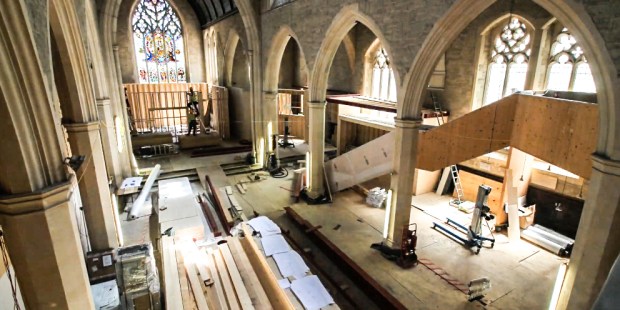 One was charged with overseeing the King James Bible.

The body of the chief overseer of the King James Bible has been discovered in a crypt in London, along with those of 4 other long-forgotten archbishops of Canterbury.

The discovery happened when workers began lifting flagstones inside the church and uncovered what appeared to be an entrance to a tomb. They attached a cell phone to the end of a pole to take a look at what might be inside.

What they saw surprised them: a golden crown that turned out to be a bishop’s miter. It lay atop one of the 20 coffins that were stacked up in the old crypt. The coffins are being left undisturbed, but builders installed a plexiglass panel so visitors can see them.

Several of the coffins have nameplates on them, including one for Richard Bancroft. He was the chief overseer of the publication of the King James Bible in 1611.

According to the report, St. Mary’s was built in the 11th century along London’s Embankment, opposite Westminster Abbey, by St Edward the Confessor’s sister.

“Over the centuries a significant number of the archbishops’ families and archbishops themselves chose to worship here, and chose to be buried here,” said Christopher Woodward, director of the Garden Museum.

Lambeth Palace is the London residence of the Anglican Archbishop of Canterbury.

Deconsecrated in 1972, St. Mary’s was due to be demolished before becoming the Garden Museum, the BBC said. In October 2015, the museum closed for 18 months to undergo a £7.5 million redevelopment project and is due to reopen next month. The museum’s website explains that in order to level the floor of the church and make the area accessible for a new gallery, the Ark, workers had to lift and re-lay stones that had been built into the chancel floor.

Their removal revealed, below, a concrete block. This was lifted to reveal a flight of steps – and, if you lowered yourself to your belly, a glimpse of an archbishop’s miter glittering in the dark. This was the discovery of a recorded vault below the Chancel for high status burials, including those of five Archbishops of Canterbury.

St. Mary’s is also the burial place of John Tradescant (c1570-1638), whom the museum calls “the first great gardener and plant-hunter in British history.” Thus, the rationale for turning the unused church into a museum devoted to gardens. “His magnificent and enigmatic tomb is the centerpiece of a knot garden planted with the flowers which grew in his London garden four centuries ago.”