Why do priests wear white albs? 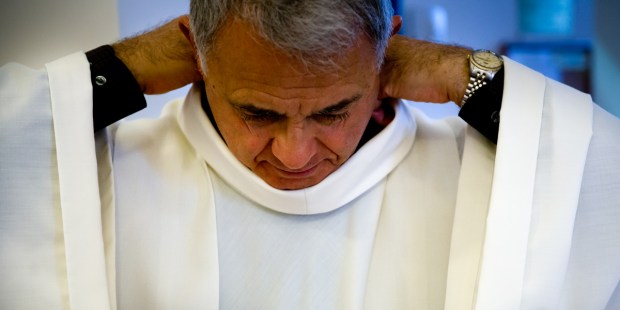 The ancient garment was not only worn by priests, but also by the newly baptized.

The English word alb, referring to a vestment worn underneath the priest’s chasuble, comes from the Latin alba, meaning, “white.” The alb traditionally is a white linen garment and dates to the very beginnings of Christianity in the Roman Empire.

At first it was similar to the ordinary white tunic worn by the Romans and Greeks, but quickly became associated with the rite of Baptism. In the early centuries of the Church, men and women (separated by gender) were baptized completely naked, symbolically setting aside their former way of life before entering the baptismal font. Then, after rising from the font, the newly baptized were given a white garment, symbolizing their new birth in Christ.

This clothing ceremony is still preserved in the modern baptismal rite, where the priest recites a prayer while placing either a white garment (or a white stole) on the child.

N., you have become a new creation,
and have clothed yourself in Christ.
See in this white garment the outward sign of your Christian dignity.
With your family and friends to help you by word and example,
bring that dignity unstained
into the everlasting life of heaven.

It is taught that all the baptized are robed in a spiritual “wedding garment” and when we die, we will (by God’s grace) present it unstained to God. This white garment symbolizes our readiness for the Wedding Feast of the Lamb (aka Heaven).

The newly baptized would wear the alb during the first week after Easter, offering a public witness to their newfound faith in Christ. According to the Catholic Encyclopedia, the Second Sunday of Easter “was consequently known as dominica in albis (deponendis), the Sunday of the (laying aside of the) white garments.” It was on this day that the white garment was put aside and regular clothing could be worn. In medieval England, the newly baptized wore their white robes throughout the Easter season, laying them aside on Pentecost, which is still known as Whitsunday (“White Sunday”) in English custom.

Over the next few centuries in the Church, the alb became more and more associated with priestly vestments. The symbolism is retained, reminding the priest of his baptism, but also with an added dimension. According to the Office for Liturgical Celebrations, the alb “recalls the new and immaculate clothing that every Christian has received through Baptism. The alb is, therefore, a symbol of the sanctifying grace received in the first sacrament and is also considered to be a symbol of the purity of heart that is necessary to enter into the joy of the eternal vision of God in heaven.”

Before putting on the alb, the priest says a prayer that recalls this symbolism and contains “a reference to Revelation 7:14…(Make me white, O Lord, and cleanse my heart; that being made white in the Blood of the Lamb I may deserve an eternal reward).”

Under current legislation, the alb has been returned to more common usage in the Church and is an optional vestment for lay ministers who have a role in the Mass (such as lector or server). This recent development has tried to reconnect the alb to its original use as a vestment of the baptized.