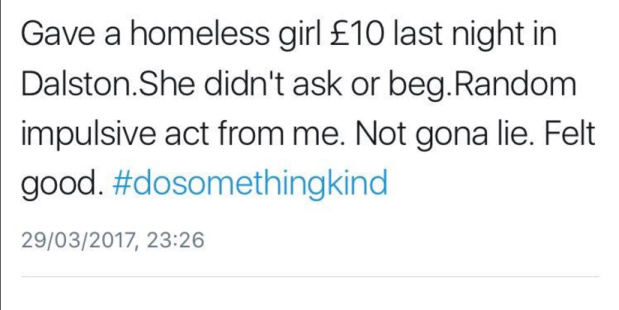 In his last post on Twitter before he died of a heart attack, Ugo Ehiogu wrote about a random act of kindness

Britain is mourning the loss of former British soccer star Ugo Ehiogu, who died at the age of 44 after suffering cardiac arrest. Ehiogu, who retired in 2009 after playing for Aston Villa and Middlesbrough, is remembered by his teammates for his kindness and character off the field as well as on it.

Former Middlesbrough goalkeeper Mark Schwarzer told BBC Radio 5, “He was a tremendous person, a tremendous character, a dedicated footballer and dedicated to his family. He was a great guy to be around, so full of life and so enthusiastic.”

In his final posting on Twitter, Ehiogu, shared a bit of his generous nature, when he tweeted “Gave a homeless girl £10 last night in Dalston. She didn’t ask or beg. Random impulsive act from me. Not gona lie. Felt good.”

After news of Ehiogu’s death was reported, his fans took to Twitter themselves to encourage each other to commit their own random acts of kindness.

Please let's all #DoSomethingKind in memory of a good man. Let's get it trending. Retweet his tweet.

And, in a tribute to Ehiogu, his hashtag #dosomethingkind is trending on Twitter:

It's a sad day for us Nigerians and for football worldwide but we'll rather celebrate your kindness. #RIPUgo @UgoEhiogu #dosomethingkind 🙏🏾 pic.twitter.com/lhCx0EuqC9