An Easter egg hunt to dive for 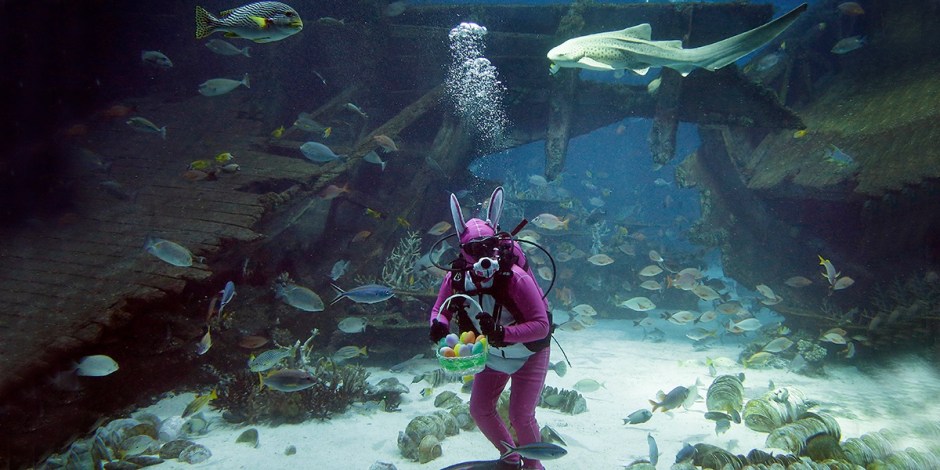 SENTOSA, Singapore – A diver dressed as the Easter Bunny swims among sharks, rays and other species of fish in the Shipwreck habitat, Thursday, at the South East Asia Aquarium of Resorts World Sentosa, a popular tourist attraction in Singapore. The performance is part of the Easter celebrations.

S.E.A Aquarium describes the event pictured on their blog:

At the S.E.A. Aquarium, we don’t celebrate the festive seasons with the usual trumpets and fanfare. In the tranquil underwater world, the days float by like they usually do–except for the appearances of our dive teams in special underwater costumes.

To celebrate Easter in April, our dive team members donned a specially made Easter Bunny outfit and appeared at the Open Ocean Habitat and Wreck Exhibit.

The Easter Bunny suit is made of neoprene which is a material for wetsuits. This is the same material that we normally wear to keep us warm on all our dives. It is safe for the marine animals.

Wearing the Bunny Suit takes more time and preparation. Usually, it takes 10 minutes for us to prepare but the Bunny Suit took 20 minutes. However, all the effort pays off when we see nothing but smiles on the faces of our S.E.A Aquarium guests

S.E.A Aquarium also features unique underwater events for Chinese New year, during which patrons can see an underwater “dragon show,” and Christmas, when Santa Claus can be seen in much the same fashion as the Easter Bunny.

So God created the great creatures of the sea and every living thing with which the water teems and that moves about in it, according to their kinds, and every winged bird according to its kind. And God saw that it was good. Genesis 1:21

Let them praise the name of the Lord,
for at his command they were created,
and he established them for ever and ever—
he issued a decree that will never pass away.
Praise the Lord from the earth,
you great sea creatures and all ocean depths.
Psalm 148:5-7

Tags:
EasterPhoto of the Day
Daily prayer
Aleteia's Top 10
See More
Advertising
Newsletter
Get Aleteia delivered to your inbox. Subscribe here.
Thank you! Your submission has been received!