Meet the martyrs of Tlaxcala, 12 years old and ready to die for their faith 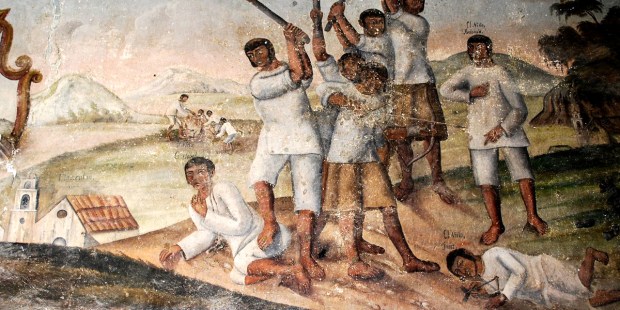 Francisco and Jacinta Marto, two of the children Our Lady appeared to at Fatima, will be canonized as saints on May 13 in Portugal.

But many are not aware that three other children will also be canonized this year, on October 15, in Mexico. These kids were martyred for their faith in 1527 and 1529, though outside Latin America most Catholics do not know about them. Their names are Cristobal (Christopher), Antonio and Juan, and they were all around 12 years old when they were put to death for their faith.

When the great Spanish conquistador Hernando Cortes landed in Mexico in 1524, there were 12 Franciscan missionaries who had come with his expedition. They had been sent by the minister of the Franciscans and had the mission of sharing God’s revelation of His Son in this New World. The 12 were spread out through four cities; Mexico City, Texcoco, Huejotzingo and Tlaxcala.

The people of Tlaxcala worshiped many gods, had numerous idols and practiced polygamy. The Catholic missionaries had a challenge on their hands, but they began to tell the peasants and the children of the caciques (Indian chiefs) about the Gospel.

The Franciscans set up schools and began teaching the locals about the Christian faith. They also began teaching them Spanish and in return were able to begin learning the native language and dialects. Toribio de Benavente Motolinia, who was called Fray Motolinia and who would go on to become one of the greatest evangelizers in Mexican history, became a close friend to one of his young pupils. His name was Cristobal (Christopher) but Father Motolinia called him Cristobalito ( little Christopher). The boy was the first born of Acxotecatl, who was the prime chieftain of the region.

The Indian chief had agreed to send his three younger sons to the Franciscan school. But he refused to let Cristobal go, as the boy was next in line to succeed his father.  Cristobal’s brothers told Father Motolinia that the friars should convince the Indian chief to send their brother to their school. They were successful.

Studying with the friars, Cristobal was so taken with the Catholic faith he soaked it up like a sponge. He asked to be baptized and he was. Upon receiving his Baptism he began preaching all that he knew of the Gospel. Everything he learned he immediately shared with his people. He was determined to share the message of their Redemption with them. Cristobal also tried to teach his father and his servants, having become horrified at their customs of idol worship and their drunkenness.

At first Cristobal’s father thought that his boy was just parroting things he heard and did not believe he meant them. He was sure the boy would eventually reject these new teachings. But Cristobal began smashing idols in their home and pouring out the pulque placed before them.

Acxotécatl grew increasingly angered with his son and eventually decided to take his life.

Acxotécatl organized a big family feast and made sure all of his sons were there. When they all were together he ordered all his sons outside. All except Cristobal. When the other boys were out the father began to beat Cristobal unmercifully. He kicked him, clubbed him and tore his flesh with a horsewhip. Finally he threw the screaming child into a raging fire.

He continued invoking God and the Blessed Virgin until he died. Cristobalito was 12 years old. He died for the faith in 1527.

Antonio and Juan were martyred two years later in Tlaxcala.

Antonio was the grandson of the Indian chief Xicohtencatl, and was in line to inherit all of his wealth. Antonio had a servant with whom he was best friends, whose name was Juan. Both of them were educated in the same school as Cristobal.

When the Dominicans came and asked the Franciscans for some help so they could begin evangelizing in Oaxaca, Antonio and Juan quickly volunteered. The boys were warned of the serious dangers of introducing a “new” God, but they insisted on going. Soon they arrived at Tepeaca, Puebla.

Antonio and Juan, filled with a zeal for Christ and His gospel, began removing idols from the houses of the locals. Word spread and when they arrived in Cuauhtinchan, Puebla, they were surrounded by Indians with clubs. Both Antonio and Juan were beaten to death.

These three are known as the “The Child Martyrs of Tlaxcala.”

We ask the Child Martyrs of Tlaxcala to pray for us all.

The account of the life and death of the Child Martyrs of Tlaxcala points to the theme of “inculturation,” a term which refers to the interplay of the Gospel with a culture, whether that be with the culture in which Jesus first spoke the Good News, or the cultures that have received the message of the Good News in history and up to our day.

Much has been written on inculturation. By way of introduction, we note here just a few points.

First off, the Vatican II document Gaudium et Spes treats of this theme in general. One point made in this document is that Christians should work with all people for “the building of a more human world.”

This sounds to be a lofty goal, and one that can be universally embraced by all humans, regardless of language, culture or religion.

What, however, makes the world more human?

In this regard, Gaudium et Spes presents a crucial teaching, which was later thoroughly developed by John Paul II:

“Christ, the final Adam, by the revelation of the mystery of the Father and His love, fully reveals man to man himself and makes his supreme calling clear.”

In other words, for determining just what it is to be human and how one goes about making the world more human, Christ is the answer. By looking at Christ, we learn what we ourselves are, and what we are called to be.

Pope Benedict XVI underlined that it is the Holy Spirit who is the true agent of inculturation, “presiding in a fruitful way at the dialogue between the word of God, revealed in Christ, and the deepest questions which arise among the multitude of human beings and cultures.”

The Holy Spirit, he said, “enables the Gospel to permeate all cultures, without becoming subservient to any.”