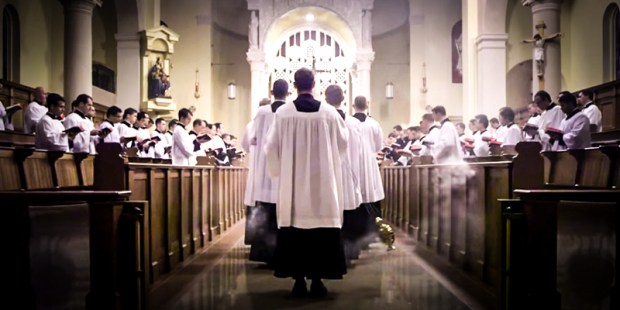 New works to give voice to pain and healing to hearts.

In the coming days, while so much of the world basks in the radiance of Easter and the new life of spring, some will find themselves burying the dead under sudden or tragic circumstances. For them, April will be a cruel month.

But they don’t have to suffer in silence.

This May brings with it two new productions – one traditional and meditative, another an original work with a cinematic scope – centered on the prayers and music of the Requiem Mass, a tradition that identifies with those in mourning, giving voice to their pain and healing to their hearts.

The first, Requiem, is the major-label debut of The Priestly Fraternity of St. Peter, an international community of priests who specialize in Gregorian chant. Executive produced by De Montfort Music (Advent at Ephesus, Benedicta) and recorded by the Grammy-winning Christopher Alder, Requiem returns to the “unadorned profundity” of chants that helped inspire Mozart’s famous composition of the Requiem – quiet, transcendental melodies rooted in Rome and even Jerusalem that contemplate the passage from life into eternity.

“I think the listener will really feel the sentiments that we should be filled with when someone dies,” Fr. Zachary Akers, music director for Requiem, explains in the album’s trailer. “We’re sad and so the priest wears black. [Ed.: In the Extraordinary Form, or Traditional Latin Mass.] But it’s not a morbid sadness because we have hope that God is merciful, and that he will bring this soul to heaven…There’s a simplicity in these chants, a somber and a profound beauty. This music speaks to the soul.”

The album is scheduled for a May 12 release, but you can listen to three samples now on the De Montfort Music website.

The second production, Requiem For My Mother, is a dramatic live performance featured in an upcoming documentary of the same name.

The documentary, which reportedly will air on PBS on Mother’s Day, follows Stephen Edwards, an American composer who writes music for film (The Prestige) and television (Desperate Housewives), as he looks to the form of the “ancient Catholic burial rite” to pay tribute to his mother after losing her to cancer.

In the trailer, Edwards describes wanting to leave “nothing to the imagination” at the international premiere of the work at the Basilica of St. Ignatius of Loyola in Rome, employing a 50-piece orchestra and children and adult choirs to get a performance of massive proportions.

The result is an epic, sprawling memento mori that trembles even as it consoles. (You can listen to Requiem for My Mother in its entirety here, and follow along with the Latin and Greek text here.) Edwards’ renditions of Kyrie, Dies irae, and Libera me (a prayer from the traditional Burial Rite) are especially heart-pounding, and feel like three cathartic releases of pain, fear, and confusion. But even in its darkest moments, the album is anchored by the gentle repetition of that perennial line of hope and faith: Requiem aeternam, dona eis, Domine, et lux perpetua luceat eis. “Grant them eternal rest, O Lord, and let perpetual light shine upon them.”