Demonstrations in Venezuela: 2 Salesian youth were the first victims 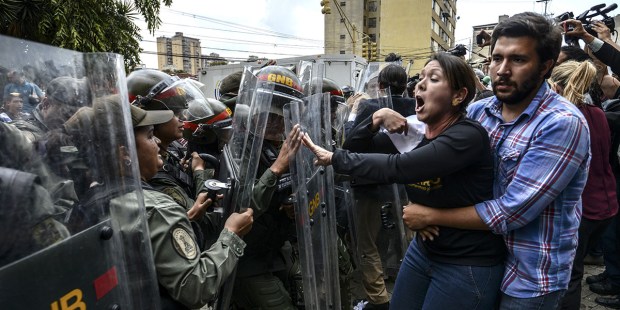 Although they were not protesting, they were killed by the “colectivos.”

On Apr 19, the Venezuelan opposition gathered in 26 different locations around Caracas and in the state capitals of the country. They intended to walk to the headquarters of the Ombudsman’s Office to deliver a document denouncing the recent rulings of the Supreme Court that stripped the Parliament of its legislative functions — a ruling considered to be a “legislative coup” led by the Government of Nicolás Maduro against the Parliament. In some cities, demonstrators made it to their destination; that was not the case in Caracas.

Carlos José Moreno Barón, 19 years old, didn’t reach his destination either. But he was not trying to get to the Ombudsman’s Office, since he was not in the protest. He was, instead, going to a soccer field in Chuao, a neighborhood located at the other end of the city, his relatives explained.

It was 10:15 in the morning, when he saw his plans truncated as he walked in the area of San Bernardino’s Star Square. He was trapped between the opposition march and a group of motorists linked to Maduro-supporting “colectivos,” who opened fire against the demonstrators. The doctors did everything they could, but a shot to the head made Moreno the first victim of the day.

The news hit Caracas’ Catholic community like a bucket of ice water. Carlos Moreno belonged to the Salesian youth movement and was a former student of the San Francisco de Sales College in Sarría, said José Manuel López, president of the Archdiocesan Lay Council. Myriam Altuve Solórzano, who knew the young Salesian, said she saw Carlos grow up in Sarría. “He was literally an earthquake, joyful, playful, a tremendous kid; he lived in our parish, and was part of the oratory. Tomorrow, his name will be used by both government and opposition supporters, but those of us who knew him are going through an immense pain. This pain unites us as Salesians. The Don Bosco oratory in Sarría is mourning. Venezuela is, once again, mourning.”

The daughter of a military official

During this very same day, in the Andean city of San Cristóbal, approximately at 2:45 in the afternoon, a group of motorists also allegedly linked to the  pro-government colectivos shot Paola Ramírez Gómez, 23, when she was going back home from a job interview, as she was passing in front of the Plaza San Carlos. She was not participating in the protests, either.

Ramírez Gómez was also a former Salesian student. She graduated from the Táriba Salesian school. Her death was instantaneous, as evidenced by a video recorded by a security camera located in a building near the place she fell.

Paola is the daughter of an official of the government’s Bolivarian National Guard (GNB), which makes her tragedy a particularly ironic episode in the situation that is affecting so many Venezuelan families.