Give a man two fish and he’ll do this 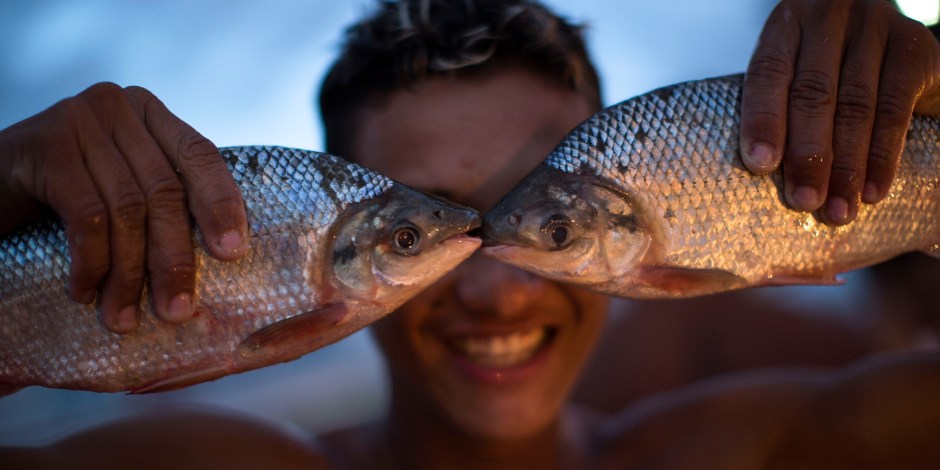 MANAUS, BRAZIL: A young vendor holds a couple fish to his face as he jokingly poses with the fish eyes in front of his own for a photo at the Panair fish market.

Jesus Feeds the Five Thousand
13 When Jesus heard what had happened, he withdrew by boat privately to a solitary place. Hearing of this, the crowds followed him on foot from the towns. 14 When Jesus landed and saw a large crowd, he had compassion on them and healed their sick.

15 As evening approached, the disciples came to him and said, “This is a remote place, and it’s already getting late. Send the crowds away, so they can go to the villages and buy themselves some food.”

16 Jesus replied, “They do not need to go away. You give them something to eat.”

17 “We have here only five loaves of bread and two fish,” they answered.

18 “Bring them here to me,” he said. 19 And he directed the people to sit down on the grass. Taking the five loaves and the two fish and looking up to heaven, he gave thanks and broke the loaves. Then he gave them to the disciples, and the disciples gave them to the people. 20 They all ate and were satisfied, and the disciples picked up twelve basketfuls of broken pieces that were left over. 21 The number of those who ate was about five thousand men, besides women and children.
-Matthew 14:13-18

Jesus Calls His First Disciples
18 As Jesus was walking beside the Sea of Galilee, he saw two brothers, Simon called Peter and his brother Andrew. They were casting a net into the lake, for they were fishermen. 19 “Come, follow me,” Jesus said, “and I will send you out to fish for people.” 20 At once they left their nets and followed him.

21 Going on from there, he saw two other brothers, James son of Zebedee and his brother John. They were in a boat with their father Zebedee, preparing their nets. Jesus called them, 22 and immediately they left the boat and their father and followed him.
-Matthew 4:18-21