Have you been betrayed? Here are two saints for you 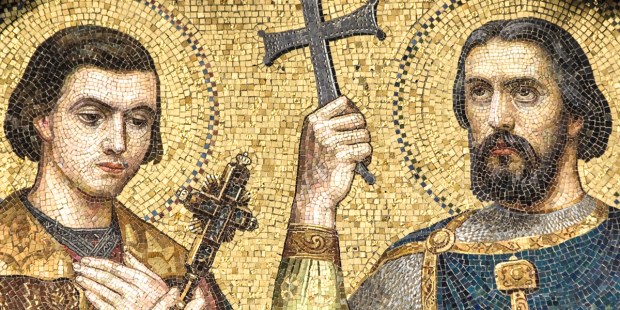 Sts Epipodius and Alexander are great intercessors for anyone who has felt the coldness of betrayal.

Born during the 2nd century, Epipodius and Alexander became best friends while growing up and attending school together. They were both raised Christian and shared a similar passion for their faith. It was not long until these two young men were put to the test during the reign of Marcus Aurelius.

At the time there was a great persecution underway, especially in their own city of Lyons. Epipodius and Alexander kept secret about their faith and sought to hide from the local authorities. A servant betrayed Epipodius and Alexander and reported them to the governor. They were to be arrested for their Christian faith but they heard about the order and immediately fled the city. They escaped to a nearby town and found refuge in the house of a Christian widow. The two friends were concealed for a time and remained in hiding.

However, they were eventually discovered and immediately brought before the governor. The Roman official sought to torture Epipodius and Alexander in hopes of getting them to renounce their Christian faith. He separated the two and first questioned Epipodius, who replied, “I shall not suffer myself to be prevailed upon by this pretended and cruel compassion. Are you so ignorant as not to know that man is composed of two substances, a soul and a body? With us the soul commands, and the body obeys. The abominations you are guilty of in honor of your pretended deities, afford pleasure to the body, but kill the soul. We are engaged in a war against the body for the advantage of the soul. You, after having defiled yourselves with pleasures like brute beasts, find nothing at last but a sorrowful death; whereas we, when you destroy us, enter into eternal life.”

Outraged by his response, the governor had him stretched on a rack and severely tortured before cutting off his head.

The governor then brought in Alexander and put him to the test, explaining how his dear friend was tortured. Alexander replied, “I thank my God that the mention of the deaths of my brethren only confirms my desire of imitating their example. Do you imagine that their souls have died with their bodies? No; they have gone to the enjoyment of heaven. You are deceived, thinking that you can extinguish the Christian faith, which has been so established by God, that it is propagated by the death of the faithful. Those whom you believe to have killed are now in the enjoyment of heaven, which they shall continue to enjoy for all eternity; while, on the contrary, you and the objects of your adoration shall be cast into the fire of hell, to suffer for all eternity. I am a Christian, like my brother Epipodius, who is now reigning in heaven. Do therefore, to my body as it pleases you; for my soul shall be received by that God who created it.”

Alexander was crucified after being tortured, and died immediately on the cross.

Epipodius and Alexander are known as the patron saints of bachelors, victims of betrayal, and victims of torture. Their steadfast example should give us courage to follow Christ to whatever end, even if that means betrayal and suffering. In the end, we must safeguard our soul above all else and not betray the God who gave up his own life so that we may live eternally.