What does “Alleluia” mean? 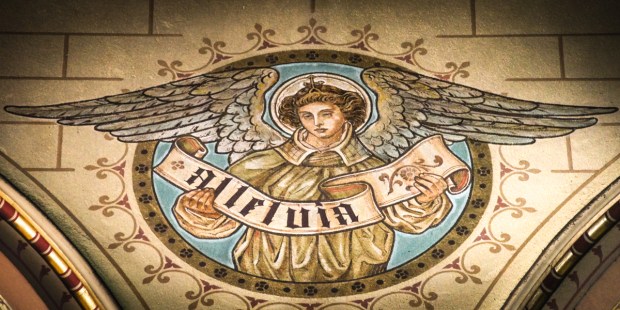 Alleluia (sometimes written “Hallelujah”) is rooted in a Hebrew expression that means “praise the Lord.”

For the 40 days of Lent the word “Alleluia” is gone from the liturgy of the Church. It is never said even once. Then during the Easter Vigil, the priest intones the great Alleluia and it seems like the Church can’t stop repeating this word over and over again. Why is that?

What does it mean anyway, and why is it so closely associated with the season of Easter?

Read more:
What does INRI on a crucifix mean?

Alleluia (sometimes written “Hallelujah”) is rooted in a Hebrew expression that means “praise the Lord.” It is found most often as a type of antiphon that is repeated at the end of the Psalms. It is also found in the book of Tobit, where it is referenced as a hymn of praise to be sung in the new Jerusalem.

The gates of Jerusalem shall be built of sapphire, and of emerald, and all the walls thereof round about of precious stones. All its streets shall be paved with white and clean stones: and Alleluia shall be sung in its streets. (Tobit 13:22)

Not surprisingly it is also found in the book of Revelation.

After these things I heard as it were the voice of much people in heaven, saying: Alleluia. Salvation, and glory, and power is to our God. For true and just are his judgments, who hath judged the great harlot which corrupted the earth with her fornication, and hath revenged the blood of his servants, at her hands. And again they said: Alleluia. And her smoke ascendeth for ever and ever. And the four and twenty ancients, and the four living creatures fell down and adored God that sitteth upon the throne, saying: Amen; Alleluia. And a voice came out from the throne, saying: Give praise to our God, all ye his servants; and you that fear him, little and great. And I heard as it were the voice of a great multitude, and as the voice of many waters, and as the voice of great thunders, saying, Alleluia: for the Lord our God the Almighty hath reigned. Let us be glad and rejoice, and give glory to him; for the marriage of the Lamb is come, and his wife hath prepared herself. (Revelation 19:1-7)

Saint Jerome is responsible for the translation of the Hebrew expression to the word “Alleluia” in the Latin Vulgate, which was then used in the Roman liturgy. It is and always has been an expression of praise, glorifying God for his goodness. For this reason Alleluia is closely associated with a season of joy, and is in stark contrast with the somber penitential attitude of Lent.

Easter is a period of great joy and exultation, and singing Alleluia is the Church’s way to highlight this reality, continually giving praise and honor to God.

So, if you ever need a short prayer that praises God, simply shout out, “Alleluia!”