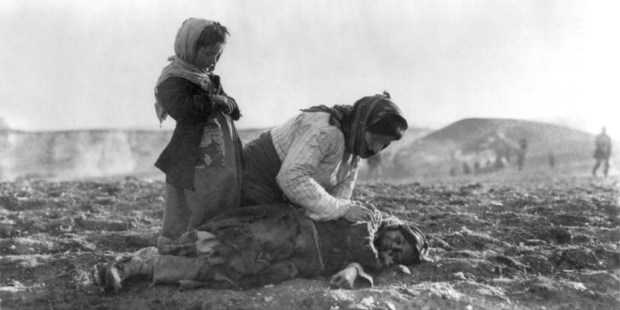 Turkish historian hopes that acceptance of the truth will lead to peace.

A Turkish historian claims to have the “smoking gun” that will prove complicity of the Ottoman government in the genocide of one and a half million Armenians in the early 20th century.

Taner Akcam, a historian at Clark University in Worcester, Massachusetts, who is known as the “Sherlock Holmes of the Armenian genocide,” said he has found a key document, hidden for more than a century, in the Armenian Patriarchate of Jerusalem.

Akcam has sought to prove state complicity in the Armenian genocide, which is still denied by Turkey’s modern government. According to an article in Saturday’s New York Times, Akcam says he has unearthed an original telegram that had been entered as evidence in early trials of officials but suppressed soon after.

The news comes as Armenians around the world commemorate the mass killings on Monday’s Armenian Genocide Day.

The telegram is from 1915, written in secret code by a high-level official of the Ottoman Empire in the city of Erzurum, asking a colleague for details about the deportations and killings of Armenians in eastern Anatolia.

A copy of the telegram had been used to convict the official as a player in the genocide, but it later disappeared, along with other documents and testimony.

When Turkish nationalists were about to seize the country in 1922, the Armenian leadership in Constantinople shipped 24 boxes of court records to England for safekeeping. The Times explained:

The records were kept there by a bishop, then taken to France and, later, to Jerusalem. They have remained there since the 1930s, part of a huge archive that has mostly been inaccessible to scholars, for reasons that are not entirely clear. Mr. Akcam said he had tried for years to gain access to the archive, with no luck.

Instead, he found a photographic record of the Jerusalem archive in New York, held by the nephew of a Armenian monk, now dead, who was a survivor of the genocide.

While researching the genocide in Cairo in the 1940s, the monk, Krikor Guerguerian, met a former Ottoman judge who had presided over the postwar trials. The judge told him that many of the boxes of case files had wound up in Jerusalem, so Mr. Guerguerian went there and took pictures of everything.

April 24 is considered the beginning of the genocide because it was the day in 1915 when several Armenian notables in Constantinople were rounded up and deported. Turkey has long held that the killing of Armenians was not so remarkable during wartime, when Muslims suffered as well. It has also said that the Armenians were traitors, and had been planning to join with Russia, then an enemy of the Ottoman Empire.

Two years ago, Pope Francis referred to the massacre as a genocide.

Akcam said he hopes that acceptance of the truth will lead to reconciliation. Much of the chaos gripping the Middle East today, he argues, is a result of mistrust between communities over historical wrongdoings that no one is willing to confront.