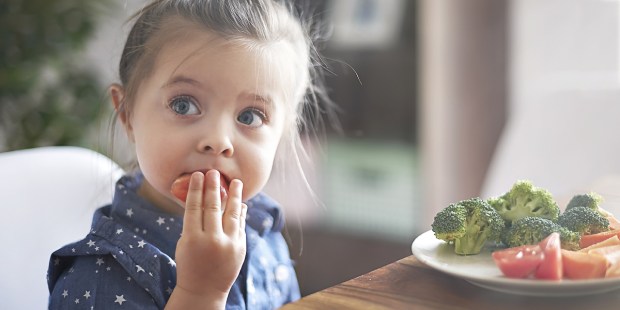 Got a picky eater who prefers Hostess treats to home cooked meals?

I’ll be first to admit I wasn’t a healthy eater as a little kid — the only vegetables I liked were carrots and potatoes (especially if the potatoes were in French fry form). I even had regular arguments with my parents about how my favorite buttery popcorn was a healthy meal option. It had ‘corn’ in the title, which meant it was healthy, right?

If you’re struggling with a little person over green beans or peas, you’re probably at your wit’s end when dinnertime rolls around. But there may be a way to end the health food war happening in family homes everywhere: researchers are finding new ways to sneak vegetables and fruits into children’s diets — successfully, and without the fuss.

Read more:
10 Habits that will give you ‘more time’ in your day

A new study that took place in a school cafeteria set out to test several theories on how to help kids eat more healthily. After three separate experiments, they found a surprisingly simple but effective solution: by serving carrots and broccoli first in the cafeteria lunch line, they were able to increase how many kids chose to take vegetables as part of their lunch. “For vegetables, their mere presentation in a multi-food context may do little to motivate intake because people opt instead to consume more of the better-liked items,” the scientists guessed before starting their experiments. What would happen if vegetables were put out as the first option to satiate hunger before kids at lunch had any other choices for what to put on their plate?

The researchers wrote, “This approach leverages a rule that people seem to follow: eat a single food that is in front of you. In some ways, this behavior seems fairly intuitive, but in other ways there is nothing intuitive about getting a child to eat a vegetable they find barely acceptable.” So maybe the answer for getting kids eat healthier could be a simple matter of when we present healthy food to them.

But there’s more than one way to skin a potato: We found three more tips on how to make healthy food seem more appealing to the little mouths gathered at your dinner table tonight.

1. Put the veggies out first at dinner

Much like the results of the cafeteria study, Traci Mann, a teacher of psychology at the University of Minnesota and author of the book Secrets from the Eating Lab agrees that when you serve veggies is paramount. “Normally, vegetables will lose the competition with all the other delicious food on your plate. Vegetables might not lose that battle for everyone, but they do for most of us.” Simply take away the competition by serving vegetables before anything else is on the table, rather than putting everything out at once. Another easy way to add veggies to their diets: put crudites of vegetables out for kids to snack on as an appetizer before meal time.

2. The only snacks at home are healthy ones

It doesn’t matter what age you are, when you’re hungry, you usually eat whatever you find first or seems easiest in the fridge. That could mean grabbing the single serving ice-cream bar instead of an orange, since the fruit takes longer to peel and clean up. By replacing easy unhealthy options with easy healthy ones, a hungry kid (and hungry adults!) will opt for the snack that’s there, even if it’s cherry tomatoes. At the beginning of the week, cut up some fruits and veggies and put them in snack size portion containers in the fridge.

If you’re worried about the fruit going bad as the week progresses, try these tips from Super Healthy Kids. The site recommends simple solutions like putting apple slices in lemon juice to prevent them from going brown. You can also put snack bags of raisins and other dried fruit together, which skips the preparation step all together.

It can be tempting to make two dinners every night — one for the adults who know the importance of healthy foods, and another for the kids who you know will complain at the sight of something green and leafy. Instead of catering to a kid’s dislike of vegetables, though, nutrition pros say … don’t. Just make everyone the same meal. After all, your home kitchen doesn’t have to be a restaurant, and you don’t have to be the short-order cook.

Yes, you might hear a few of the old whines at first, but when kids see you eating healthily and enjoying it, they’ll be more interested in eating the same thing that you are. And it’s never to early to start eating healthy — studies show that kids who eat seven to nine servings of fruits and veggies a day are 25 percent less likely to have calcium buildups in their arteries and hearts, compared to kids who only eat three to four servings a day. Plus, one dinner means less food prep time and grocery shopping for you. And you deserve a little side of me-time with your veggies, too.