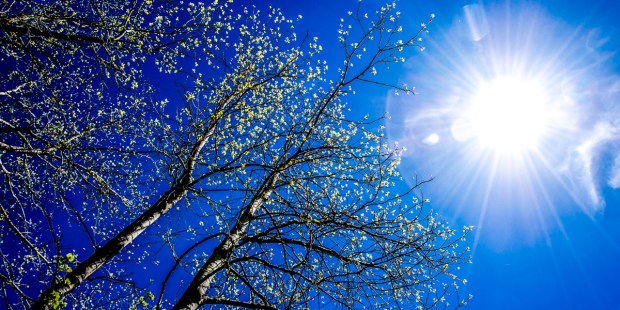 Something greater is in store beyond this world, a place of wholeness and comprehensive sunshine, endless energy and completion.

This morning, when Spring came, I didn’t recognize it. I was inside shivering in bed, afraid of the 5 a.m. dead-dark of winter, of stepping outside to face the cold — the cold that had anchored in my hips last November and hadn’t left.

I made it out the door somehow, bundled and cowered head-down. And then – what first told me to look up? Something sensual was speaking. There was, unbelievably, pleasure out there today. The wind, which I could only remember being doggedly, stupidly, unrepentantly cold – it was new. It had an edge like lotion – moist and soft, telling of comfort to come. It was a mother’s breath blowing off a spoon of hot soup for her child. Let me blow out this cold weather, dry out the earth, darling; lovely things are headed your way.

The smell spoke too. Enough snow melted yesterday that fat, succulent ridges of mud are everywhere, and chilly fresh puddles that won’t freeze. I want to say the smell told me of all the possibilities of spring – but it didn’t, at first, because I didn’t know spring yet – the smell just asked a question, do you want to know more? More is possible. More than the snow could offer. My nostrils burned a little with the unexpected potency of it. And this scent-question took hold in my mind – is more possible?

Then the birds! Winter sounds are wailing winds, mortaring ice on the window, the squeal of stuck tires. But hearing these robins and chickadees, with their alive voices, their throats really using the sweet air around them to make a song, little pulsing hearts millimeters away from the sound pouring out of them – my ears drank, smelled, saw, tasted something, elevated beyond their own singular sense.

I encountered all these things this morning. They broke into the depressive gray world I’d been living in, and I asked, “What is happening to the world?” as though I thought the world incapable of change.

And it’s Spring, came the answer; I found Spring as if for the first time.

In the past I would’ve beaten myself up for having my nose so close to the ground that I forgot Spring would come again. I would have said, well, Kate, way to navel-gaze. Where is your memory for wonders? You forget God’s gifts so quickly. When summer goes away, do you go away from Him?

But today those accusations were hollow, and I knew it. I knew that I’d given everything to being faithful to my tasks through the winter, but that I’d lost something in the doing of it. It wasn’t hope, exactly, because I didn’t despair – but it was the expectation of anything beyond drudgery, of anything to delight or be full and bountiful and overcome me.

It was that I learned to live expecting only hard work and looking for a way to survive. God was in that hard work and survival, but my experience of His tender creative work, His promise of future delights – it was so far removed as to seem as though I’d understood it wrongly.

And so here, for the first time, I experienced a sense that something greater is in store beyond this world, a place of wholeness and comprehensive sunshine, endless energy and completion.

It made me realize something of God’s mercy. We often don’t allow for moments of frustration or ignorance in carrying our crosses. If there’s a problem, we argue, it’s my own weak fault for not accepting, not understanding the mysterious ways of the Lord.

But this doesn’t leave room for the winter quotient. The wearied cross-carrying that has taken so much out of me that I don’t know how I began or where I’m going, just that I have this cross, on this foot of ground right now, and I’m tired. All I can do, every scrap of my energy, is spent just holding that cross up, trying to not put it down. I can’t see where I’m headed with it, I have no idea why I have it, and I certainly can’t rejoice in it.

God sees that. He sees I didn’t put it down. In His Fatherhood, he loves me even when that is all I can do, and he knows the work it took for me to do even that little bit. He isn’t there with his grade-book docking me points for attitude and incompletion. He just sees me holding it and can’t wait to bring me to a place of rest and delight with Him forever afterward. That’s his Mercy. He sees where I am, and doesn’t tell me I could be trying harder or better or differently, He sees that I’m giving it my all – and He sends Spring.