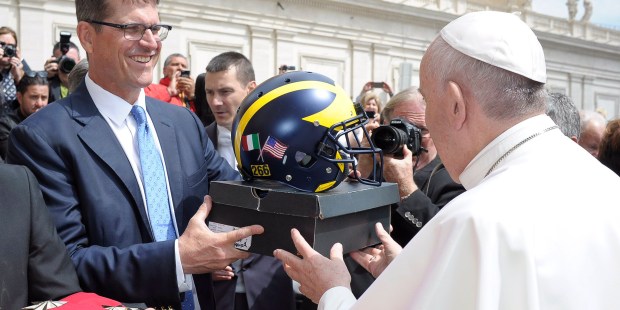 During the off season it is not typical for a college football team to make travels overseas or to schedule practices in a foreign country. Yet, Michigan Wolverines’ head coach Jim Harbaugh is doing exactly that in the most unlikely location: Rome.

Funded by a private donor, his team is currently on an eight-day trip in Italy, touring the Eternal City and taking in the many historic sites before ending the week with three practices.

On Wednesday the team attended the general audience in Saint Peter’s Square (it was an optional event for all the players) and Harbaugh gave Pope Francis a Michigan football helmet, as well as a pair of Air Jordan sneakers.

After the audience, Harbaugh’s son told the Detroit Free Press, “It’s an incredible honor to be here with the Pope…It’s almost surreal, We were about 15 yards from him. It’s almost other worldly. Most people go their whole lives without seeing the Pope in person. It’s pretty special.”

However special it was meeting the Pope, Harbaugh has even bigger plans for the trip, bringing along his family with the hope of having his newborn son baptized at the Vatican and securing a Mass where his daughter can receive her First Holy Communion. Before going to Rome Harbaugh wrote on Twitter, “My dream is to have our baby Baptized at the Vatican.”

John Paul Harbaugh conceived in the Jubilee year of Divine Mercy declared by @Pontifex My dream is to have our baby Baptized at the Vatican pic.twitter.com/OlzbNeu3wq

This week Harbaugh updated ESPN about the trip, saying, “It’s amazing…To have our whole team here, my family. Our team, the conversations that you have here — just learning from each other and experiencing all this together. It’s as good as it gets.” Among the many activities the team was engaged in this week was a paintball game for team bonding.

While many of the events during their trip are focused on team building exercises, Harbaugh also scheduled a time this past Sunday to give back to those less fortunate in Rome. Their first visit after the long flight was to meet refugees at the Villa Borghese gardens. According to the Detroit Free Press, “About 20 refugees, mostly from Africa and the Middle East, were bused to the park to hang out with the Wolverines Sunday…The players and coaches handed the refugees Michigan backpacks with sweatshirts, a hat and T-shirt.”

Besides the gifts, the team spent time teaching the refugees about the game of American football, something entirely foreign to them.

“It put a lot into perspective…I got close with a guy named Muhammad from Gambia who had to leave his family, his parents. He and his siblings came to Italy. Gambia just wasn’t a very safe place for them to be at this time. He said he came to Italy with the shirt on his back, a pair of shorts and some shoes that were two sizes two small. That really, right off the bat, put things into perspective. Myself and my teammates are wearing new Jordan gear for this trip, really just makes us realize how fortunate we are and we shouldn’t take it for granted.”

After team practices in Rome, players will be free to stay and travel overseas or return home to finish up studying for final exams.