A satellite image revealed a city’s “islands of darkness,” leading to its ultimate transformation 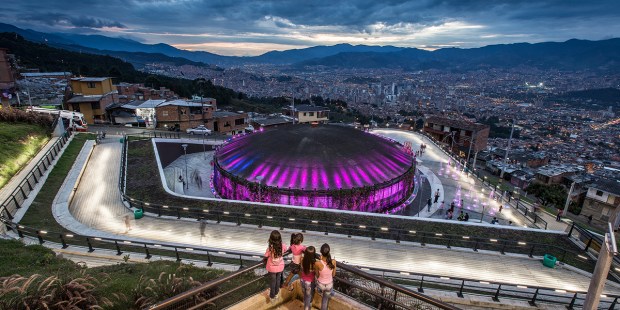 While working on a master plan to update the streetlights of Medellín, Colombia, public works officials found something strange in a satellite image of their city: 144 “islands of darkness” forming a ring around the middle of the city.

To their surprise, according to an article in Platforma Arquitectura, they discovered that these dark spots were located at the sites of 144 water tanks that had built between 1910 and 1950, at what was once the edge of the city.

Population growth had since spread past this ring of water tanks, and cut off from the rest of the city, without any public shared space, slums had grown around them. Drug dealers could operate with impunity in darkness. The neighborhoods had become 144 centers of violence, crime and isolation.

In a move that earned them the moniker “the World’s Most Innovative City,” in 2013 Medellin urban planners decided to transform 20 of these water tanks, which were located in city’s poorest neighborhoods, into public parks. What had been scenes of desolation became urban oases of public spaces for cultural activities, picnic areas, children’s play areas and sporting events.

In the last 20 years, the city itself has been transformed. While drug trafficking is still a problem, Medellin has seen its homicide rate cut by 80 percent. Once known for its violence, crime, and desolation, the city is now an important economic center, and even a popular tourist destination.

The once crime-plagued city is now a model for urban innovation – one that can be copied anywhere, Gaviria said:

“Medellín was 20 years ago in the darkest night, and now we have light,” Gaviria said. “You don’t need a lot of money … . You need creativity and you need emotional capacity, you need will, and of course, you need courage. And a lot of love, love for our people.”