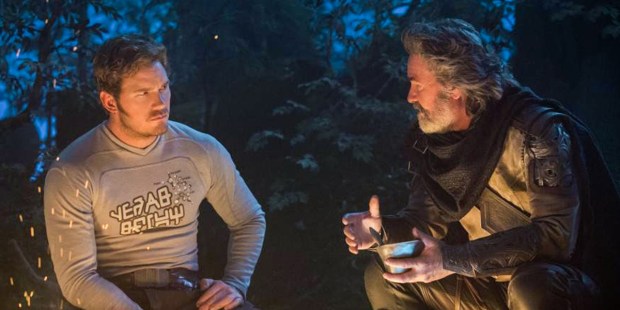 On finding a father in ‘Guardians of the Galaxy Vol. 2,’ and in real life.

Peter Quill, a.k.a. Star-Lord, doesn’t just find his typical heaping helping of trouble in Guardians of the Galaxy Vol. 2 (out next week). He finds his birth father.

While we won’t reveal the details of said meeting here (primarily because we don’t know them), Peter’s reunion with his god-like biological pops is said to be surprisingly heartfelt.

“It runs the gamut of emotions for him,” Guardians director James Gunn told USA Today regarding the father-son reunion, “wanting to understand why his father wasn’t around to quickly idolizing him and ultimately learning the reality of the relationship and comparing the man who sired him to the man who raised him.”

It’s just the most obvious nod to family in a superhero series that — all of its action and yuks aside — has always been about it. Even if the family we see on screen isn’t always a typical one.

A young Peter loses his mother in the first Guardian of the Galaxy’s opening scene. To say that Gamora has a troubled relationship with her own fam is a bit of an understatement. Drax’s family was slaughtered by the first movie’s big bad, Ronan. None of the movie’s heroes has a place to go for Thanksgiving dinner. They don’t have real families … so they bond with each other and make their own.

But as lovable as Guardians‘ makeshift-and-heartfelt relationships are, Peter’s own desire for family — for a father figure — forms the emotional nucleus of the story. And don’t take that from me: Chris Pratt, who plays Peter Quill, says so:

“What I really love the most about the sequel is that it focuses on the themes of family,” Pratt told Vanity Fair. “The movie has a lot of action and funny jokes, but it’s the father/son dynamic that gives the movie meaning and takes it to another level.”

I imagine that the movie’s father themes resonate deeply with Pratt, given his own start as a dad.

Read more:
Mark Wahlberg on Faith, Family, Hard Work, and What He Prays For

Pratt’s married to actress Anna Faris, and their son, Jack, was born in 2012 — nine weeks early. The boy weighed less than four pounds and spent a month in intensive care.

Pratt talked about those early days during the 2014 March of Dimes Celebration of Babies Hollywood Luncheon — the IVs, the feeding tube, the incubator that was Jack’s “first crib.” The boy sometimes stopped breathing altogether. “One of the brave and amazing nurses would come over and shake him a little bit, I guess to remind him he was alive,” he said.

During that difficult time, though, Chris had an opportunity to get very close with his son. Holding him tight, hearing him breathe. “Skin-to-skin,” the doctors called it.

“My little boy was laying across my neck and chest feeling my heartbeat and feeling my love, and I played him country music and I sang to him and I made him promises,” Pratt said. “You know, about … just about what kind of dad I wanted to be, and I just prayed that he’d be here long enough and he was going to let me keep him.”

The experience, Pratt says, brought him a new understanding and a new appreciation of faith. He’s now one of Hollywood’s most outspoken Christians, and regularly talks about his spirituality.

An example: Earlier this month he was given his very own star on the iconic Hollywood Walk of Fame. He posted a picture of the star being made and included Psalm 126: 3: “‘The LORD has done great things for us, and we are filled with joy.’ Thank you to the many, many people who empowered me to follow my dreams,” he wrote.

Psalm 126:3 "The LORD has done great things for us, and we are filled with joy." Thank you to the many, many people who empowered me to follow my dreams. #surreal #gotgvol2 #WHATSMYSNACK

And then, during an emotional ceremony officially unveiling the star, he thanked God again. “I’m a man of faith, and I believe that God works in mysterious ways, and gives us signs and gifts in life,” he said. “And those gifts oftentimes come in the form of people.” He thanked his mother and his wife. “You’ve given me so much,” he said to Faris. “You gave me the greatest star in the galaxy in my little boy, I love him and I love you.”

Read more:
“Suicide Squad” is not a hit with comic book fans

Jack is a very healthy 4 now, and just starting to process what his famous dad does for a living. Pratt told Jimmy Kimmel on his show that his favorite memory of making Guardians of the Galaxy Vol. 2 was of Jack visiting the set — including a walk on the Guardians’ super-cool spaceship.

“You saw it in his eyes,” Pratt said. “[He] thought, ‘I’ve seen it on TV or in the movie, but I guess my dad really does fly a spaceship for work!'”

Well, maybe “fly” is a bit of an overstatement. But for Chris Pratt — just as for the character he plays — the thrill of jockeying a spaceship around the galaxy is nothing compared to the thrill, the joy, of family.