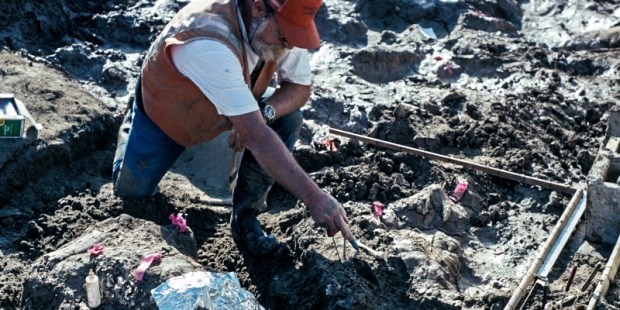 Damage to unearthed mastodon could only have been caused by humans, scientists argue.

The common understanding of the history of North America is basically that the land was devoid of people until, possibly, tribes from Asia began crossing the Bering Strait and spreading south some 15,000 years ago, giving us eventually, the various tribes of “Native Americans.”

But a new finding challenges that view, suggesting that humans reached the “New World” more than 100,000 years earlier than previously thought.

Most genetic and archaeological evidence shows humans first entered the Americas some 15,000 years ago. But a study nearly 25 years in the making in this week’s Nature finds that the 130,000-year-old bones of a mastodon, an extinct relative of the mammoth, unearthed in California were split open with blows from rocks. Rocks discovered near the bones bear the hallmarks of use as hammers, the scientists report.

“The smashed bones may have been the handiwork of a Neanderthal, the scientists say, or the more ancient human relative called Homo erectus, or even our own species, Homo sapiens,” the newspaper reported.

The study has its roots in 1992, when roadwork near San Diego uncovered mastodon remains.

Digging revealed two large, heavy stones whose sharp edges and cracks pointed to use as anvils. Each anvil stone was surrounded by mastodon-bone fragments and flakes of stone, as if someone had been crushing bone on the anvil.

The bone fragments, some from a mastodon’s stout thigh, were scarred with marks and notches that are hallmarks of a violent blow on fresh bone. Old bone, the scientists say, shows different fracture patterns. Near the anvils the researchers found three bulky “hammer stones” apparently used to bash the bones.

Scientists tested their interpretations on skeletons from the buried bones of modern-day elephants. Slamming rocks into the elephant bones, they were able to recreate the damage they had found on the mastodon bones.

Only humans could do this sort of damage to a mastodon, researchers concluded. The question is whether they were Neanderthals or other ancient humans. And where they came from and how they got here? Did they cross the sea between Asia and the Americas, or did they walk across the now-submerged land bridge between the continents?

But, as one would expect, there are plenty of skeptics in the field of anthropology.

“If this site is as reported, then it would indicate that there was an ancient human dispersal to the Americas that left no trace in the fossil record or the genome of ancestral Native Americans,” said John Shea of Stony Brook University, who adds, “Nature can do some odd things to rocks and bones, creating objects that look very similar to artifacts.”

Researchers are actually using new methods to analyze the bones. The team feels “a responsibility to continue to check this through new ways of testing,” said study co-author Daniel Fisher of the University of Michigan. “I don’t think this is the last word.”