One must toe a fine line to keep the balance 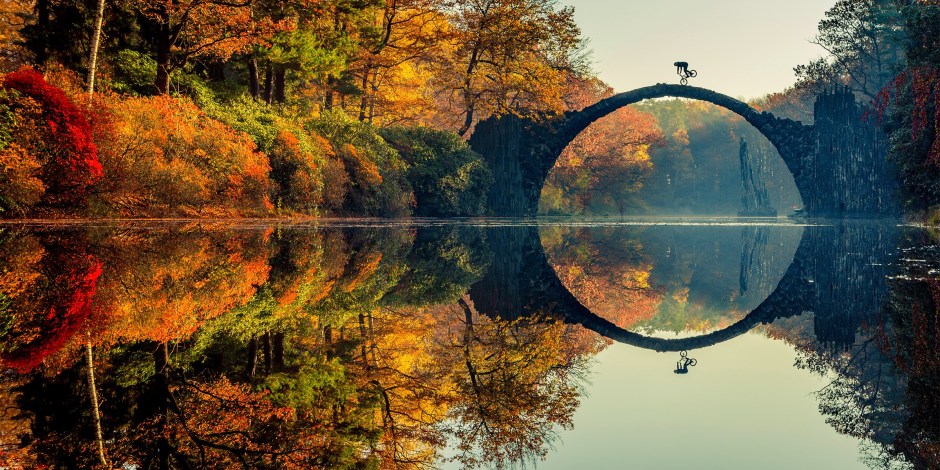 GABLENZ, Germany: Senad and I were on the way to a different location early in the morning, when we passed this scenic spot. We saw a sign from the street and I had some pictures in mind that I’d seen from this bridge on the internet. When we got there the sun was just above the trees and it was lighting up the full color-spectrum of the autumn leaves in a very soft way.

One thing that was a little annoying was that the lake was covered with leaves which had fallen from trees, so the reflection of the bridge in the lake was just not there. But sometimes you just need a bit of luck – I had been on a fishing trip some days before and still had my fishing-boots and a net in the car. So got the stuff and tried to clean the lake by hand. It took a while until it was almost perfectly clean – at least where it was relevant for the picture. Luckily the sun was still very soft, so we had good light for the shot.

I’d chosen a very low camera position to get an almost perfect mirrored scene on the water surface. The bridge looked like a perfect circle and the light was still very good. When Senad was on the bridge, it took us two or three tries to get the shot. There was also no more time for another try because the wind came up and the perfect reflection on the water was gone.

We jumped back to the car and drove towards our originally planned spot. It was an awesome feeling to have shot this picture with more or less pure luck. Without the sign next to the road, we would have passed one of the nicest photo scenes.

Biography of Lorenz Holder: I grew up in Munich, close to the Bavarian mountains, and it is those mountains that have always played a major role in my life. I was a semi-professional snowboarder back in the day, until I injured myself badly and I pretty much had to quit snowboarding for a whole season in 2003. In that time I discovered the pleasure of photography.

I was fascinated by photos that could describe a whole scene, a whole story or even a whole week, in just one small moment caught on film. This fascination was one of the biggest motivations for me to start my career as a professional photographer.

In my photos, I like to show the viewers the beauty of the environment where athletes perform. I’m a huge fan of landscape and architectural photography and I try to combine those genres with action sport. I think a great location is one of the key elements for a great action picture. Right now I work as a staff photographer for Nitro Snowboards.

Tags:
EconomyPhoto of the Day
Daily prayer
Aleteia's Top 10
See More
Advertising
Newsletter
Get Aleteia delivered to your inbox. Subscribe here.
Thank you! Your submission has been received!