The keys to understanding the Pope’s visit to Egypt 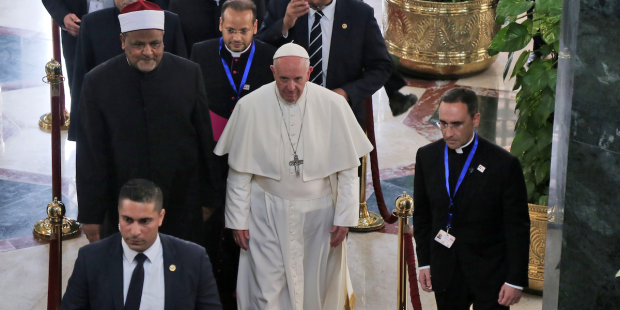 Analysis of the Pope’s visit to Egypt, with Professor Francesc Xavier Marín, philosopher and expert on Islamic culture, civilization and religion

Pope Francis’ visit to Egypt, originally planned for June, and later moved forward to May, is finally taking place on April 28-29, 2017. Perhaps a factor affecting the change of dates is the delicate situation of the Copts after the attack on the church of Saints Peter and Paul on December 11, 2016, or the communique released last February 19 in which the Islamic State designated the Copts as their highest priority target in Egypt. Be that as it may, the fact is that the press office of the Holy See publicly announced a few weeks ago that “The Pope has accepted the invitation from the President of the Republic, the Bishops of the Catholic Church, His Holiness Pope Tawadros II and the Grand Imam of the Mosque of al-Azhar, Sheikh Ahmed Mohamed el-Tayeb.” These four convergent invitations represent an equal number of challenges for Pope Francis.

What is the real motive for the visit?

Marshall al-Sissi visited the Vatican in November of 2013, and invited the Pope to travel to Egypt to commemorate the 70th anniversary of the re-establishment of relations between the Holy See and Egypt. The Pope will have to deal with the president of the Republic’s attempts to achieve international recognition after the coup d’état that he led in 2013. Just a few months ago, al-Sissi received strong praise from President Donald Trump for the severity with which he is repressing the Islamist opposition, and al-Sissi trusts that his meeting with Pope Francis on April 28 will help him to spread the image of being a peacemaker in a State which, with the Arab Spring, was in danger of internal division.

Francis’ interview with al-Sissi in Heliopolis is part of the political protocol, but the main motivation for the papal visit is the invitation from His Beatitude Ibrahim Isaac, the patriarch of Coptic Catholics. The Egyptian Catholic Church is very small in numbers (it has only 300,000 members), and it is characterized by both a variety of rites (Coptic, Syriac, Melkite, Maronite, and Latin Catholic rites…) and by a strong presence in social work, principally in the areas of education and health care. The Pope’s meeting with the Catholic community on the 29th at the Maadi seminary, as well as the Eucharist celebrated at a stadium in Cairo, will represent an opportunity to reaffirm the urgency of the social commitment of Catholics, at a time when the government’s economic reforms impose tax penalties on houses of worship, as well as on schools and hospitals run by the Catholic Church.

Meeting with the Coptic community

Although the Pope’s principle motivation may be to visit the small Catholic community, it is nevertheless probable that attention will be centered on his meetings with the Coptic and Islamic communities. As is generally known, the relations between the Holy See and the Coptic Church have never been comfortable. Beyond the strictly Christological debate created by the Council of Chalcedon regarding the two natures of Jesus, some other highly important facts should be remembered. The first is that the 10 million Egyptian Copts form the largest Christian community in the Near East. It is a community which historically was not affected by the diaspora, and which has become a sort of key to the debate surrounding identity, in which whatever is Coptic is identified with what is originally Egyptian. However, it is also a Christian community which historically has not been very receptive to modernity. Rather, it is focused on a faith directed by an omnipresent clerical class which has encouraged the idea that the Copts are a group with a vocation to martyrdom. This closing of the community upon itself was encouraged throughout the long pontificate of Pope Chenuda III (1971-2012), who was harshly criticized not only for his authoritarianism and his pretension of representing all the Coptic communities at once, but also for his strong collusion with the autocratic military regime, a fact which has created little sympathy for his community on the part of the rest of the Egyptian population. We can look, for example, at Pope Chenuda’s sharp criticism of Christians who participated in the protests of the Arab Spring in 2011, accusing them of collaborating with liberal Muslims in bringing down a dictatorial regime that was beneficial to the Christian community.

In December of 2012, Tawadros II succeeded Chenuda as Pope of the Coptic Church. He enjoys notable prestige for his theological openness, his interest in ecumenism, and for his initial pretension of marking a certain distance with respect to the military regime. Nevertheless, if in 2011 the televised images of Chenuda supporting the dictatorship’s repression of protesters in Tahrir Square dealt a blow to those who hoped that the Coptic church would shift towards democratic postures, the words of Tawadros on July 3, 2013, publicly encouraging a military coup d’état to depose President Morsi, had no less of an impact. Certainly, Pope Francis will have to grapple with a Coptic Church which strongly defends the idea that the military dictatorship is the best regime for Near Eastern Christians.

On the other hand, Pope Francis is traveling to Egypt to reciprocate Imam Ahmed Tayeb’s visit in 2016. Imam Tayeb is the head of al-Azhar University and a leader of Sunni Islam. Relations between Islam and Christianity were worn very thin by the controversy created by Benedict XVI when, in Regensburg in 2006, he seemed to indicate a convergence between Islam and violence. It must be noted that, over the past few years, there has been significant progress on both sides: in 2016, Sheik Tayeb signed an agreement for cooperation between al-Azhar and the Catholic University of Paris, and in February of 2017 the Egyptian university organized a conference on the roles of Christianity and Islam in the face of religious fanaticism. At the end of the conference, the university formally adopted a declaration on peaceful interreligious coexistence, proposing that the State should move forward unhesitatingly to grant full citizenship rights to Egyptian Christians. On his part, from the very beginning, Pope Francis has openly expressed a special interest in strengthening relations with Islam: in May of 2014, he visited Jordan and Palestine, and in 2017 he met with representatives of the Italian Islamic community and with President Rohani of Iran, as well as with Islamic representatives of interreligious dialogue from Algeria, Bahrain, Indonesia, Iraq, Jordan and Syria.

The Pope is visiting Egypt in response to a quadruple invitation from communities with their own internal challenges. The motto of the trip is “The Pope of Peace in the Egypt of Peace.” It’s a motto that each community can interpret differently: President al-Sissi wants to present himself to world-wide public opinion as the guarantor of an Egypt pacified through repression, but also as a strong ally in international geostrategy; Patriarch Ibrahim Isaac understands that a peaceful Egypt also requires a significant presence of Coptic Catholics in the strategic sectors of education and health care; Pope Tawadros must deal with Coptic Christians who accuse him of complicity with the autocratic regime, as well as struggle with the terrorism campaigns of the Islamic State; Sheik al-Tayeb, on his part, hopes that Pope Francis’ visit will provide firm support for making Egypt a laboratory for debate on violence that claims justification on religious grounds.

Francesc Xavier Marín has a doctorate in philosophy and a diploma in Religious Sciences, and is a professional expert on Islamic culture, civilization, and religion. He is a professor at Raymond Llull University (www.url.edu) and at the Higher Institutes of Religious Sciences of the cities of Barcelona and Vic. In addition, he is on the Advisory Board for Religious Diversity of the Government of Catalonia, and is a Postgraduate Professor of Communication and Religion in the Digital Age at Blanquerna Observatory (www.obsblanquerna.com).