Can’t get to Rome? Join us as we visit the Eternal City’s ‘Little Madonnas’ 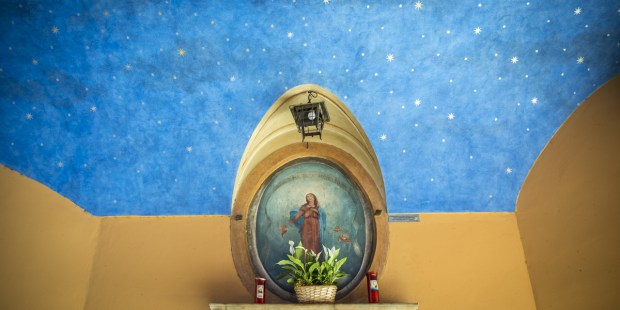 Each day of May, we’ll take a look at another image of Our Lady.

The month of May is traditionally dedicated to Our Mother, the Virgin Mary.

Today we begin a daily tour (until May 31) through a particular artistic expression of Marian devotion: that of Rome’s “Madonnelle” (“little Madonnas”). These are images of Mary—some of them miraculous—scattered throughout the streets and alleyways of the city. They are the object of much popular devotion.

In ancient Rome, small shrines (aediculae) were built at intersections of country roads in honor of the gods who protected travelers. Starting in the Middle Ages, similar shrines to the Madonna arose, and soon they were spread throughout all corners of the city. (Halfway through the 19th century, there were 1,421 of them; about half of them have survived until today).

Despite time and neglect, they bear witness to a devotion that is still alive, usually expressed through a flower or a candle, but also through the occasional “ex-voto” (a silver heart or other token of gratitude) for blessings received. Until the beginning of the 20th century, residents paid out of their pockets to keep the lights on in front of the shrines: an expression of devotion, but also the only way of providing illumination during the night in the city.

Walking through the alleyways of Rome, it’s not difficult to happen across Madonelle embedded in the walls of houses, at street corners, and on walls surrounding private property. Year in and year out, these images of Mary observe the busy comings and goings of merchants, passersby, the rich and the poor, the greatness and misery of humanity.

It was verified (with a bit of canonical procedure) that several Madonelle moved their eyes and cried between July and August of 1796. It was a premonition of what would happen shortly after, with the Napoleonic occupation. From then on, devotion to the Madonnelle became the emblem of Roman resistance to the French invasion.

Another significant period in the history of this devotion is the end of World War II. In 1944, Pope Pius XII had consecrated the city to the Madonna of Divine Love, asking her to save the city from bombing raids. In thanksgiving for the dangers that were averted, shrines dedicated to the Madonna of Divine Love were built throughout the city, which even today are the object of devotion.

(We are thankful for Sergio Gittarelli’s contribution. He is the author of the book The sacred shrines of Rome. Walking through the streets of Rome to discover “Madonelle.” )