ZAKYNTHOS, Greece: “I never thought that at some point in my life, I would stand right at the edge of a 200-meter cliff, taking pictures of ‘crazy’ people jumping off it. But there I was in Zakynthos Island, Greece, where the 2011 ‘ProBase Shipwreck Boogie’ was taking place. Thirty BASE jumpers from all around the world had been invited to participate in this competition.

This particular picture was taken right after the competition had ended, leaving all the BASE jumpers free of stress and letting them have 100-percent fun jumps.

As I looked through my camera, I realized that there were three perspectives – angles I had not noticed thus far. One angle is made by the rock itself and its shade on the water, and all the boats positioned in parallel, even the one that is leaving the scene. The second angle is the beach that runs parallel to the shipwreck and perpendicular to the rock. The third is the direction of the free fall of the BASE jumpers. The shipwreck is the start of all three perspectives. So even if this shot is full of energy and freedom, it also contains hidden geometry, which is why I believe people like it so much.

I used a zoom lens in order to follow the BASE jumpers and get them in the right position in my frame. I used the preset “sport” because I wanted to have good lighting on the jumpers, giving priority to the speed of the shutter. I had the focus point on one of the jumpers because they are the main subject in the frame.

The Greek sun did what it does best, providing perfect lighting conditions for a result, I think, that is worth viewing.” 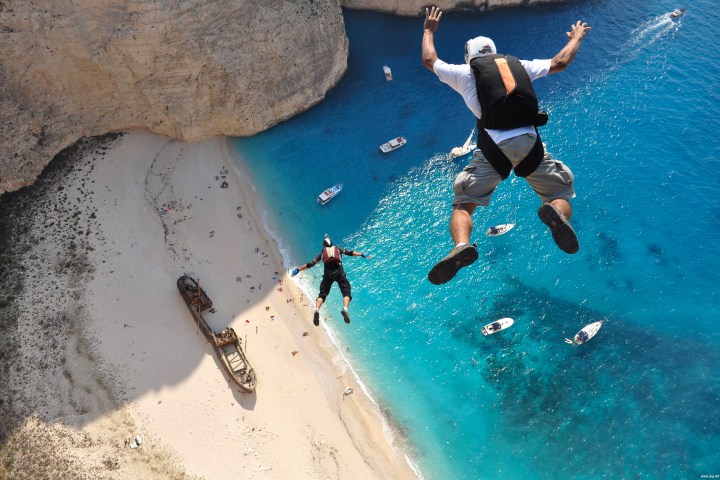 “I was born in Athens in 1980. I graduated from the Technological Institute of Athens in Greece as a Technologist of Graphic Arts and Design. For two years I worked at the scanning and photo editing department of a major newspaper in Greece and spent another two years working at a print shop. In addition, I have been the owner of the pre-press company PoisonDesign for more than five years.

My photographic skills are self-taught and I have never attended a photography school. I just love taking pictures, especially of extreme sports. For the past three years, I have been the official photographer of ProBase, a company that organizes BASE Jumping events all over the world.

Having my own climbing and photography equipment, I push my limits by trying to reach the edge of every exit point, no matter if it’s at 20m or 1,000m, from a helicopter or a plane. There is nothing more satisfying than the rush of a human being leaping from a safe place and diving towards the ground only with a parachute – I simply love what I do!”

Tags:
Photo of the Day