Why did the Pope go to Egypt? 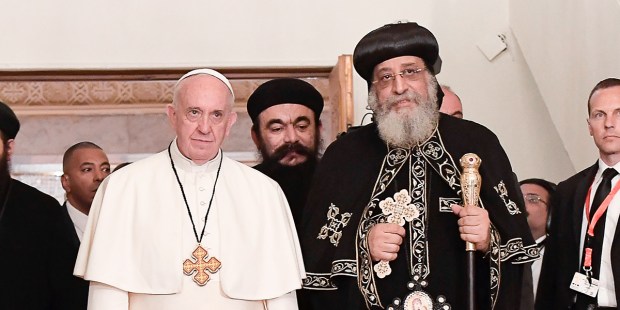 Pope Francis’ trip to Egypt on April 28 and 29 was a real success on all levels. But no one could’ve known for sure that was going to be the case.

On paper, it was high-risk trip. The impressive security device put in place by the Egyptian government along the main roads the Pope was going to go through, with agents stationed every 500 meters, was eloquent enough to confirm it. Helicopters and drones were making sure no risks would threaten the mass held at the military stadium on the morning of April 29, while security forces on the ground wouldn’t allow any mobile phones in. Anti-explosive trained dogs even sniffed the briefcases and hand luggage of the journalists joining the papal flight back to Rome. From this point of view, there is no doubt the Egyptian government certainly succeeded in making the Pope’s trip a smooth one.

But the risks of this visit were not only matters of sheer physical, personal safety. In diplomatic matters too, Francis’ apostolic journey to the land of the Pharaohs was full of traps, as a diplomat of the Curia admitted. Facing the gathered Muslim scholars of Al-Azhar, who sometimes might have an ambiguous official position on human rights, and above all on those of women, at the prestigious homonimous mosque-university of Cairo (one of the greatest intellectual bodies in the Sunni Muslim world) was part of it.

Likewise, on the issue of dialogue with Islam, the diplomat emphasized, words might get “trapped”: the difficulty of a common language, despite the smiles on the façade, is quite patent. In the context of repeated attacks against the Copts in recent weeks, Pope Francis’ speech to Al-Azhar during a peace conference organized by the same Islamic university could have been seen as a provocation, or even as open confrontation. This was not at all the case. The Pontiff, in a diplomatically unassailable speech, yet also charged with unusual density and depth, made no concessions. He was emphatic in his demand that all religions strongly condemn violence committed in the name of God, while also addressing the younger generations, asking them to fight ignorance and indoctrination through formation and culture, and to stand for human dignity in all circumstances.

While still on the plane that took him to Egypt, the Pope gave the keys to properly interpret this apparently perilous journey: “unity and fraternity.” “Fraternity” concerns Muslims, with whom theological dialogue might be difficult, if not impossible, according to the words of Cardinal Jean-Louis Tauran, president of the Pontifical Council for Interreligious Dialogue. It is indeed difficult to evoke the figure of Jesus in interreligious contexts but, on the other hand, dialogue can be indeed established on the basis of human brotherhood and common values, ​​such as those concerning family, for instance.

The “unity” the Pope mentions concerns the Orthodox Church in Egypt. The image of the Pope sitting alongside the Coptic Patriarch of Alexandria Tawadros II and the Patriarch of Constantinople Bartholomew I, praying together in the Church of St. Peter, paying tribute to the 29 martyrs who died last December during different attacks on Coptic churches in Cairo, is all the more revealing. In their joint declaration, signed on the same day, Francis and Tawadros II used the term “ecumenism of martyrdom,” wishing that the blood of martyrs could become “the seed of unity among the disciples of Christ.” On this basis, which is completely aligned with Early Christian tradition since Tertullian (the blood of the martyrs has always been considered the seed of Christianity), it is quite possible this papal journey, much more than others, has sowed a token of extremely powerful unity. Especially, since the Copts constitute the first Christian minority in order of importance in the Middle East and Northern Africa.

The successor of Peter did not leave Catholics aside. This was also one of the “risks” of this highly political trip. Again, the Pope was able to find the words to encourage the “little flock” of Catholic Copts (about 200,000 faithful all throughout Egypt). Despite the ubiquitous security, Pope Francis succeeded in creating a warm family-like atmosphere during his ride in a small golf cart before the Mass. Later, he addressed the clergy,  making it clear he understood and shared their everyday burdens. He also encouraged priests, seminarians, and Egyptian religious to be the yeast in the Egyptian dough, following the example of the monks of the Egyptian desert, the “inventors” of Christian monasticism.

To the Catholic “minority within the minority” of Egyptian Christians (who make up between 10 and 15 percent of the population), Pope Francis presented himself as an attentive and concerned pastor. He asked the Orthodox to care for their Catholic brothers, but also reminded Egyptian President Abdel Fattah Al-Sissi and the civil authorities that Christians are “an integral part” of Egypt and that, even though it became a Muslim country in the 7th century, Egypt’s Christian roots go back to the evangelist Saint Mark.

In the end, with truthful words carefully weighed, and walking in a seeming minefield, but also with his always friendly presence (his picture friendly hugging Imam Al-Tayyeb proves it more than any speech), the head of the Catholic Church accomplished a journey whose fertility will certainly be measured over time. This destination was not randomly chosen, and precisely because of its long and diverse tradition and history, the Pontiff did not fail to ask Egypt to play a fundamental role in the struggle against extremists. The word of the Scripture, “from Egypt I called my son” (Hosea 11: 1), which could be read on one of the posters displayed at the military stadium in Cairo during the papal Mass, suggest that in the future this country might continue to play a decisive role in the fate of Middle Eastern Christianity.