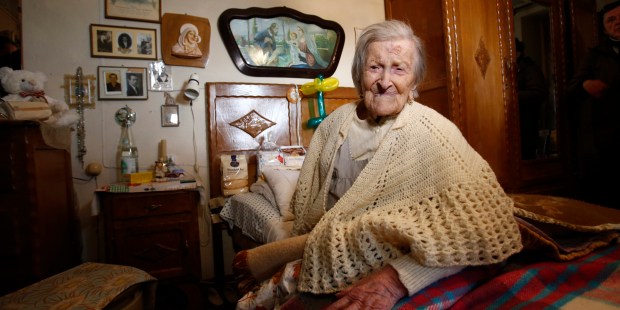 It seems simplicity is the secret formula.

Emma Morano recently relinquished her title of World’s Oldest Person, dying on April 15 at the age of 117. She was the last person on earth who was born in the 1800s, and her long life brought fame to Verbania, the lakeside Italian town where Emma moved as a teenager for health reasons. She left only a few things behind, a record of a life lived simply.

“We have too many things, too many distractions, too many items offered to us, too many messages, and a person like Emma struggles to emerge,” the Rev. Giuseppe Masseroni, who himself is 91, said at Ms. Morano’s funeral on Monday.

Her “simplicity is sculptural” — and out of step with modernity, he said.

Besides living simply, what were the secrets to Emma’s long life?

1. Listen to your doctor

When she was a girl growing up in Villadossola, the humidity and cold winters were too hard on Emma’s constitution. Her doctor told her to “change air” and she complied, settling in Verbania near the doctor’s recommended Lake Maggiore. She never left.

Emma’s daily diet consisted of plenty of raw food, but not of the vegetable-and-fruit variety that we’re used to. Instead, she ate three raw eggs every day and added raw ground beef to her pasta. Yum!

3. One marriage is enough

Emma’s brief and unfortunate marriage in 1938 was enough for her. She lived the rest of her life alone, claiming that she “didn’t want to be dominated by anyone.”

4. Remember the ones you love

Emma kept photos of her parents and eight siblings next to her bed. Her parents instilled a sense of determination in their children, particularly their six daughters — but that didn’t stop the girls from having fun once in a while. Emma fondly recalled how she and her sisters would sneak out to go dancing until “our mother would come looking for us with a birch stick.”

The only other photo she kept near her bed was of her infant son, who lived from January to August of 1937. She was buried with the photo, according to her wishes.

Emma wore her rosaries for decades, until her nieces feared that they might choke her in her old age. But they hung next to her bed until the day she died, in the place of honor by the photo of her son.

So there you have it — the simple secrets to a long life. Listen to your doctor, eat raw eggs and meat, don’t get married twice, love your family, and say your prayers.

(I mean, except for the raw eggs and meat part — I’m not entirely sure those are worth the extra 20 years.)