Wishing you hadn’t done or said that? This saint can help 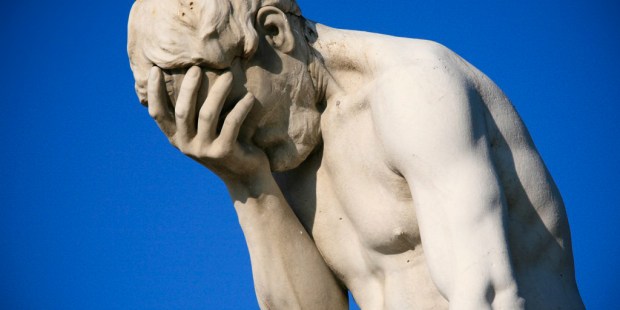 What did it feel like to be tested or reproved by Jesus?

Today we are celebrating my favorite apostle, St Philip.

I like him a lot because — though he isn’t mentioned much in the Gospels — he comes up twice in interchanges with Christ which, I imagine, were the kind of conversations that keep spinning in your head for days or weeks afterward.

Both of these are recounted in the Gospel of John.

The first is when Jesus was about to miraculously multiply the loaves and fish to feed the multitude.

Our Lord says to Philip, “How are we to buy bread so that these people may eat?”

Now, if I were Philip, I don’t know what kind of answer I would have given. I wonder if I would have felt the way I feel when a boss is giving me some difficult task or calculation, in front of everyone, which I know I can’t fulfill. Jesus has asked Philip for a solution to a humanly impossible situation.

The Gospel says as much in the next verse, “This he said to test them, for he himself knew what he would do.”

I like to think about what kind of character Philip was, based on his response. His answer might point to a practical and mathematical sorta guy. Did he do a mental calculation of the number of people that were there, how much food it would take to feed them, and the cost of bread, and come up with this answer: “Two hundred denarii would not buy enough bread for each of them to get a little.” Or perhaps he was using a common phrase of the day, in the way we might refer to a million bucks as a sum both exorbitant and far more than we’d possibly have to spend.

Andrew then chimes in — perhaps decidedly less practical than Philip? — saying that a lad on the scene had five barley loaves and two fish. Was it an exasperated glance from Philip that led Andrew to add, “But what are they among so many?”

Jesus takes over at that point and we know the rest of the story.

Now skip forward to the Last Supper. Jesus is telling the apostles the very good news about how he’s going to prepare a place for them in his Father’s house. The apostles can’t wrap their minds around what Christ is telling them and Thomas gives voice to their confusion with, “Lord, we do not know where you are going; how can we know the way?”

This leads to the very important explanation that Jesus, himself, is the way, the truth, and the life, as he puts it, and that no one comes to the Father but through him.

A bit farther on, still unclear, it is Philip who says, “Lord, show us the Father, and we shall be satisfied.”

And Jesus responds with a reproof. “Have I been with you so long, and yet you do not know me, Philip?”

Was Philip left a little stung by Jesus’ reproach?

Yet Our Lord uses Philip’s question to offer what is perhaps the clearest revelation of the Trinity to be found in the Gospels, saying twice that He is in the Father and the Father is in Him.

Perhaps by this point in following Jesus, Philip was humble enough to not dwell on the reproof. But had I been in his shoes, I’m pretty sure I would have kicked myself, and felt more than a tinge of regret for asking what was apparently a dumb question, or at least a question that seemed to vex the Teacher.

Philip wouldn’t have realized in that moment, or not fully realized, how his question — though it brought a reproof from Jesus — was actually a gift he’d given to the entire Church for millennia to come.

And that’s why he’s my favorite Apostle.

Because I frequently seem to be doing or saying things that just don’t come out quite right. I often wish that there were a Ctrl+Z option in my life. I definitely wish for it at work on occasion.

But when I have those moments when I’ve done something that didn’t make me look so good, it helps me to remember that God likes to use those scenarios to bring about greater goods … goods in my own life and maybe even goods in the life of others.

So, St Philip, please pray for me.

Pray for me when my vanity has been wounded because of something I’ve done or failed to do, when I’ve said something I shouldn’t have or in a way I didn’t mean, or been misunderstood.

With your intercession, help me to offer to Our Lord my reputation and my honor, that all of me might be at the service of his plan and that he might show himself through me.

Read more:
Praying for humility when you love compliments