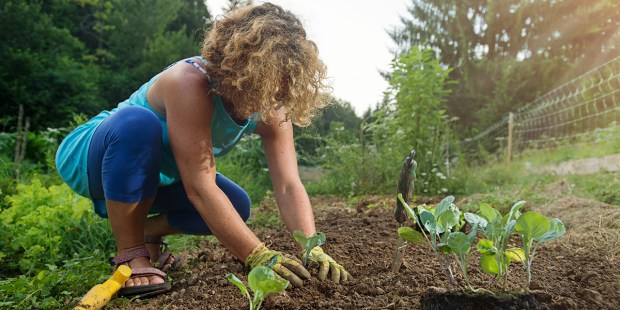 God can work with the tiniest speck …

When young Jack sells his mother’s cow to a strange old man in exchange for those five magic beans, it’s purely on faith. He doesn’t really know that they’re magic, and he certainly doesn’t know he’s going to get a miles-high beanstalk out of them. He was just promised that they were amazing, whatever that means. I feel a lot like Jack this spring.

A week ago I dug out my old garden, yanked up a bunch of stubborn weeds, disturbed a bunch of cold grubs and spiders, and carefully poked some hard, wrinkled green bean seeds into the ground as my toddler watched me. I told him, “Soon, we will see baby bean plants come up!”

I said that, but without any conviction at all.

The thing about gardening is that, unless you have an advanced biology degree, the only reason you have to assume that your little dry seed is going to become a gigantic, flowering, food-producing plant is that somebody told you it would. Maybe you’ve seen it before, but the first time you did it, it was on pure trust. You don’t know the intricate process by which the little fellow turns soil and light and water into leaves, vines, and food. You know that it needs those things, but you don’t know how it does what it does.

That’s where I have trouble. I almost never believe something will happen, if I don’t know how it works.

So I feel like Jack–I feel like some old man gave me a little packet of bean seeds, and it’s tremendously silly and naive of me to assume that if I put them an inch underground, they will turn into something totally new. But still, everybody seems to claim that bean seeds can turn into plants. It seems crazy, but I’m going to give it a try.

Anyway, yesterday I found myself praying surprisingly fervently to find seedlings in my garden, and I realized why the stakes are so high. If my seeds grow, against all visible odds, then maybe my prayer will bear fruit too. Praying and planting are very similar. People say that prayer works. God himself told us quite directly that we must pray. But nobody, not to my satisfaction, could possibly explain how my own ridiculously mundane desires offered heavenward can have some kind of sway in the unfolding of the Plan of God.

Lately, as often happens, I’ve felt especially foolish when I pray, and I am starting to hear that little voice whispering, “Why even bother? It won’t work. God’s going to do what he wants. He’s not interested in your prayers.” It’s just a temptation, but it feels familiar to me now. After all, why bother to plant seeds, when you can’t guarantee they’ll grow, and have no idea how that growth happens?

When I planted my garden, I hoped that it would grow, but I barely believed it. Usually, these days, when I pray, I hope to be answered, but I doubt that I will be. But then, I never would have put the seeds in the ground if I didn’t think it was possible that by some miracle of nature, they might grow. Maybe the fact that I’m praying at all means I have the tiniest speck of faith. God can work with that.

Seeds and prayers–it’s an encouraging comparison. If I am willing to plant seeds, and wait and hope, then surely I can take my hopes to my Father, and wait for him to do his mysterious, unknown work, in the world and in my heart. I might not see the fruit of my prayers until the next life, but maybe that isn’t too long to wait.