Venezuela devolves into chaos as leader tries to change constitution 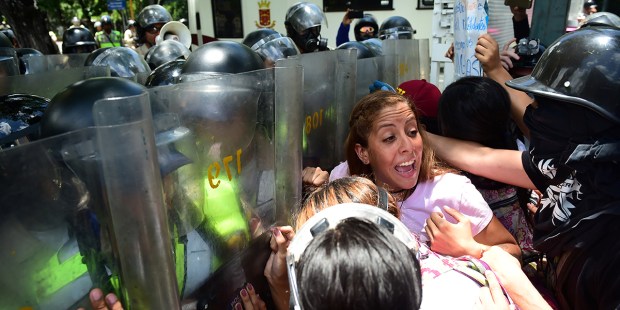 Opposition, world leaders concerned about Caracas’ decisions and the masses affected by them

Clashes continued this week in the streets of Venezuela’s capital between protesters and police, as the Organization of American States, the U.S. government and Pope Francis all sent signals on what should be done to resolve the deepening crisis in the country.

“The instability is very high right now. The environment is like a civil war,” said Father Victor Salomon, a parish priest in a poor section of Caracas, said in an interview.

Venezuelan President Nicolas Maduro this week called for a “constituent assembly” to bring about changes long sought by his administration and that of his predecessor, Hugo Chavez. But there have been near-daily demonstrations calling for his ouster. Over the past month, 37 protesters have been killed in the streets, and Pope Francis on Sunday appealed for an end to the violence.

The opposition is demanding elections; autonomy for the legislature where they have a majority; a humanitarian aid channel from abroad, and freedom for more than 100 activists jailed by Maduro’s government.

The Trump administration said this week that it might impose more sanctions on Venezuelan officials, Reuters reported Wednesday. And a bipartisan group of US senators said it will introduce legislation providing humanitarian assistance to Venezuela while toughening sanctions against corrupt officials.

“The government has tried all these years to change the constitution but not with the support of the people,” Father Salomon said. “Right now the problem is they’re trying to do the same but with an assembly.”

Also keeping an eye on the situation was Virgilio Reyes, a Venezuelan who immigrated to the United States 18 years ago. He said Maduro is trying to craft a new constitution that will take two or three years to implement, “and in those years the Venezuelan people will not have the opportunity of having elections.”

Father Salomon said that contributing to the violence is the fact that the government does not permit the opposition to march freely in downtown Caracas. Also, by law, the national guard and the police cannot use tear gas during demonstrations, but they are using it, he said, and not only at protest marches but in hospitals, malls, and residences.

In spite of that, without the government calling for elections, the only option is for “people resisting in the streets, like Chile with [Augosto] Pinochet or Serbia with [Slobodan] Milosevic,” the priest said.

“The other option would be the resignation of the president, but he doesn’t want to lose the power,” he added.

The food and medicines shortages, affecting a wide swath of Venezuelans, are “getting worse every day, because we are like in a war,” Father Salomon said. “You see more people standing on lines. I work in one of the biggest favelas in Latin America. We have a school, and some nuns tell me, ‘Father, we have in some classes only half of the students because they are too weak to come to school.’ You can find demonstrators like one who said, ‘My mother died because I couldn’t get the medicine she needed.'”

He compared the situation to the Soviet Union under Josef Stalin: “When he was in power he tried to put the people in starvation to control them. I think that the government right now, in the favelas, the barrios, the poor neighborhood, are starving them, and they are giving them a food box in exchange for their political support. The poor people are going out saying the coordinator of this food box says ‘If we don’t support them they won’t give us the food.’”

In addition, the government is still not permitting overseas aid agencies to help.

“Two or three months ago, Catholic Charities from Chile sent a big container of medicines, and the  government took it,” Father Salomon said. “They won’t permit the Catholic Church to help.”

Reyes said that food is available, but inflation and other factors make it extremely difficult to obtain.

“The government expropriated the companies that produced food,” he said. “You can’t do anything about it. Otherwise, you have to get on long lines,” he said. “You have to pay the mafia, the people who can get the food for you.”

Reyes said he has to send his family money every 10 days so they can afford food and medicine.

The comparison to the Maduro regime to Stalin’s isn’t completely groundless. Writing in Foreign Policy magazine this week, the Atlantic Council’s Anders Aslund asked pointedly, “Is Venezuela Headed for a Soviet-Style Collapse?”

The Chavez-Maduro regime, Aslund says, “has insisted for years on maintaining drastic price controls on a wide range of basic goods, including food staples such as meat and bread, for which it pays enormous subsidies. Nonetheless the Venezuelan government, like the Soviet Union’s, has always felt it could afford these subsidies because of its oil revenues.”

But the bottom dropped out in 2014 when the international price of a barrel of oil dropped precipitously. “Rather than increase oil production, the Venezuelan government has been forced to watch it decline because of its mismanagement of the dominant state-owned oil company, PDVSA,” Aslund writes. “And now Venezuela seems intent on repeating the Soviet folly of the late 1980s by refusing to change course. This is allowing the budget deficit to swell and putting the country on track toward ultimate devastation.” He continues:

Venezuela already is dealing with massive shortages as a result of its controlled prices, because the government can no longer afford its own subsidies. But it will get worse from here. Maduro seems intent on printing money like crazy, so the next step will be hyperinflation. Inflation is already believed to have reached 700 percent a year, and it is heading toward official hyperinflation, that is, an inflation rate of at least 50 percent a month.