‘Guardians of the Galaxy Vol. 2’: Pro-family (even the dysfunctional ones) 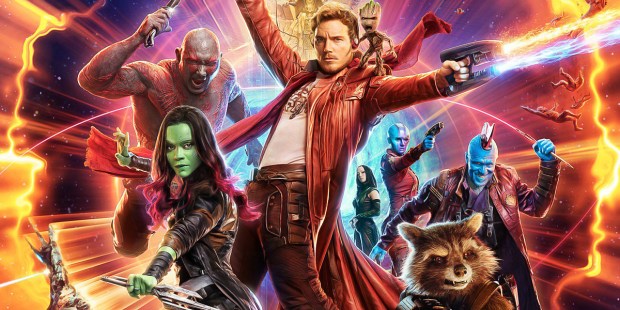 This superhero romp will have you laughing yourself silly.

Sure, there are criticisms that could be leveled at Guardians of the Galaxy Vol. 2, the follow-up to the insanely successful breakout hit of 2014. It doesn’t have the same sheen of newness as its predecessor. It meanders a bit in the second act. Its climax revolves around yet another universe-shattering menace. All of that is true. All of that is also, for the most part, meaningless. After all, is there any criticism, no matter how valid, that could possibly dissuade a good portion of the planet’s population from seeing this movie?

Let’s face it, all Guardians of the Galaxy Vol. 2 has to do in order to secure its place among the top ten box office draws of 2017 is for it be somewhat as entertaining as the first movie was. Not as much, mind you, just close enough. In that, it succeeds, in spades.

The movie opens on the planet of The Sovereigns where our heroes await the arrival of an interdimensional monster they have been hired to dispatch. The ensuing chaos that follows the beast’s appearance results in what is probably the most fun opening credit sequence since Deadpool. It goes without saying that the whole sequence plays out while the first of many a classic 70s rock tune blares on the soundtrack. And, of course, there is dancing.

Upon completing the harrowing task, the Guardians return to The Sovereign to collect their reward. Rather than money, though, the payment comes in the form of Gamora’s psychotic sister, Nebula. With their prisoner in tow, the Guardians take their leave of The Sovereign. Unfortunately, the ever-irascible Rocket decides to pocket a little extra treasure without asking, so it isn’t long before the entire Sovereign fleet is in pursuit. Things look bad for The Guardians, but just as doom seems certain, rescue comes in the form of Star-Lord’s long-lost father, Ego, The Living Planet.

There’s so much to enjoy here. For the movie nuts, there is the simple fact that Kurt Russell plays Ego. Who better to portray the father of the swaggering, cocky Star-Lord than the man who perfected that type of role while Chris Pratt was still in diapers? For comic fanboys (and girls), there’s the glee in seeing a whacked-out character like Ego, a sentient planet whose surface is shaped like a man’s face, make the jump from the funny books to the big screen. It is one of the great strengths of the Marvel movies under Disney that they have been able to successfully introduce mainstream moviegoing audiences to some of their comics’ more outlandish concepts. Even better, they’ve gotten actors like Kurt Russell to play along with them.

Play is the operative word when it comes to The Guardians of the Galaxy series. With this outing, it continues to be the most lighthearted of Marvel’s cinematic efforts (yes, even more so than Ant-Man). While this means the films don’t have quite the depth of previous films like Captain America: Civil War, there’s still something irresistible about watching a cast have this much fun. In that regards, special mention has to be given to Michael Rooker. While his surly Yondu was a minor character in the first Guardians, here he is elevated to full star status, and every minute he is onscreen is pure entertainment.

Oddly enough, it is also Rooker’s character who ultimately brings the most heart to the film. As in the first chapter of the Guardians saga, Vol. 2 spends some time ruminating on its characters’ need for a family, whether they want to admit it or not (most of the time it’s not). Drax is still dealing in his own inimitable way with the death of his wife and children. Rocket continues to have issues with his communication skills. Gamora and Nebula continue to struggle with their upbringing under the mad titan Thanos. Baby Groot needs parental guidance. It’s all dysfunction at its finest.

However, it is Star-Lord’s family drama that drives most of the story. He finds himself faced with having to deal with the legacies of Ego, the god (with a small ‘g’ the film is very quick to point out) who sired him, and Yondu, the man who raised him. In fact, although the analogy is nowhere near perfect because all of the film’s characters are flawed to the point of ridiculousness, it’s hard not to see a faint echo of the infancy narratives of Jesus in the story. I mean, come on, the main character’s name is Star-Lord, after all. It’s right there. And while Rooker’s character is hardly the best of role models, the unexpected humanity he brings to Yondu this time around really drives home the importance of father figures in the lives of young children. It makes you realize, if you are so inclined to make the connection, just how crucial the role of the mostly silent Saint Joseph must have been in the young Jesus’ upbringing.

That kind of thinking is for the ride home, however. What you’ll mostly be doing while actually watching Guardians of the Galaxy Vol. 2 is laughing yourself silly. That is the movie’s singular goal, to keep you entertained for two hours. And in that, it is critic-proof.