The Young Pope would like to meet Pope Francis 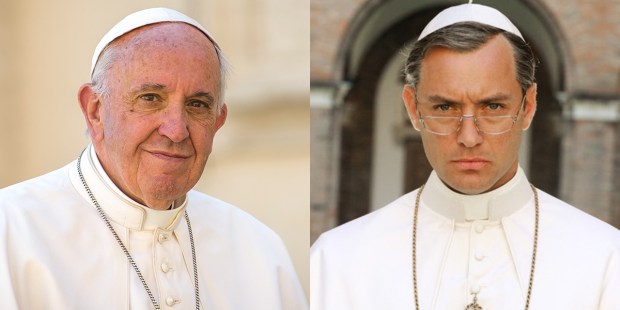 Jude Law, also (recently) known as Pius XIII, the pope of the televised series The Young Pope by Paolo Sorrentino, told the Italian Episcopal Conference daily newspaper Avvenire, on May 3, 2017, that he wished to meet Pope Francis. “It would be a pleasure to meet him, but unfortunately this has not yet been possible,” Law said.

The 44-year-old actor officially announced the second season of The Young Pope was already on course. Filming is expected to begin in the summer 2018, and most likely it will be released in 2019. “I am very proud to be part of this series, playing such a fascinating and complex character; a pope that’s quite different from Jorge Bergoglio.” In fact, Law’s role is that of a very young, American, smoking, reactionary and a bit paranoid pope.

“The antipodes” of Pope Francis, really?

It was the Italian director Paolo Sorrentino who wanted this character to be “to the antipodes of Pope Francis.” Pius XIII is “a man attached to the ancestral traditions and rites of the Catholic Church,” said the filmmaker, “a pope who closes doors instead of opening them (…), who rebukes the faithful and exhorts them to make absolute sacrifices, in obscurantist fideism.”

In short, Sorrentino’s is a purely fictitious pope. The actor himself explained that he had not managed to find enough elements in the history of the popes, the Church and the Vatican “to fully understand his character.”

The character would have been almost indeed in the “antipodes” of Pope Francis were he not also sensitive to the drama of the lives of the most deprived in the world. This is a virtue the American actor said he particularly admires in Pope Francis. “His generosity conquers the heart of anyone who is open to spirituality,” Law said, adding that he was “delighted with the way in which he succeeded in bringing the entire international community together in his embrace.”