Why is the Vatican establishing diplomatic relations with Myanmar? 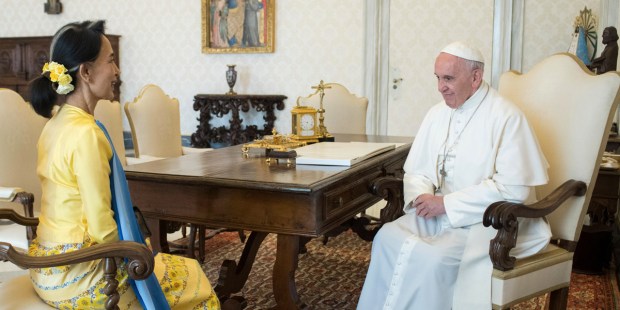 Amid allegations of ethnic cleansing and grave human rights violations, the Church’s voice needs to be heard in the corridors of power in Naypidaw

VATICAN CITY — The Holy See and the Republic of the Union of Myanmar (Burma) have agreed to establish diplomatic relations, the Vatican announced on Thursday.

“Keen to promote bonds of mutual friendship,” the two nations “have jointly agreed to establish diplomatic relations at the level of Apostolic Nunciature, on behalf of the Holy See, and Embassy, on the part of the Republic of the Union of Myanmar,” a Vatican statement issued May 4 said.

But the groundwork for the joint agreement was laid on February 8, when Bishop Paul Tsang in-Nam, Apostolic Nuncio in Thailand and Apostolic Delegate to Myanmar, submitted a formal proposal to Burmese government to establish diplomatic relations between the Holy See and the Republic of Myanmar. The proposal was unanimously accepted by Burmese deputies on March 10.

During yesterday’s private audience, the establishment of diplomatic relations was then formally approved by both parties.

This is not the first time Pope Francis and Aung San Suu Kyi have met. On October 28, 2013, Francis granted an audience to Suu Kyi, but at the time she was serving as the General Secretary of the National League for Democracy party and held no official state office. Then spokesman for the Holy See, Fr. Federico Lombardi, said at the time that their first meeting was an opportunity to recall that interreligious dialogue was “a fundamental key for peaceful coexistence among peoples.”

Why are the Holy See and Myanmar establishing diplomatic relations now? And what does it mean for the Burmese people, particularly for ethnic minorities?

Aleteia spoke with Benedict Rogers, a writer, journalist and human rights advocate specializing in Asia. Based in London, Rogers serves as the East Asia Team Leader for Christian Solidarity Worldwide. His work has taken him to North Korea, China, Pakistan, Sri Lanka, Indonesia, East Timor, Burma and beyond.

But Rogers’ personal journey also passes through Burma. In 2013, on Palm Sunday, he was received into the Catholic Church in St. Mary’s Cathedral, Yangon (Myanmar’s largest city) by Cardinal Charles Bo (then Archbishop of Yangon). For ten years, Rogers worked closely with Cardinal Bo, who inspired him greatly in his faith. His story is told in his book ‘From Burma to Rome: A Journey into the Catholic Church.’

In this interview with Aleteia, Benedict Rogers discusses the significance of the Holy See’s decision to establish diplomatic relations with Myanmar. He also explains why it is a sign of hope for the Burmese people, and he details the grave violations against human rights and religious liberty which ethnic minorities in Myanmar have suffered for decades, and which still continue today.

The Holy See has announced its intent to establish diplomatic relations with Myanmar. Why do you believe this is happening now? And why is it significant?

The last few years have seen several significant developments for the Church in Myanmar – the celebration of 500 years of the Church’s presence in the country, the beatification of Myanmar’s first ‘Blessed’ on the way to sainthood, Blessed Isidore Ngei Ko Lat, the appointment of Myanmar’s first-ever Cardinal, Cardinal Charles Bo, and a number of other key events. And at the same time Myanmar is undergoing a political transition, in which over five decades of military dictatorship have ended and a fragile democracy is being built, resulting in the election of a civilian-led, democratically-elected government led by Aung San Suu Kyi.

That democracy is still in its infancy, the military remain very powerful, both constitutionally and in society, and conflict, religious intolerance and other very grave human rights violations continue, so the situation is fragile, but that is where the Church can be a force for good. It therefore seems the right time to establish direct diplomatic relations.

It is significant because it will strengthen the influence of the Church in the country. The Church, and in particular Cardinal Bo, is a powerful and outspoken voice for human rights, justice, freedom and peace for all the peoples of Myanmar, of all ethnicities and religions, and the Church is one of the few institutions in Myanmar that truly reflects the ethnic diversity of the country. Pope Francis has spoken out for the rights of the persecuted Muslim Rohingya people on several occasions, as has Cardinal Bo. Having direct relations will enable the Church to do more.