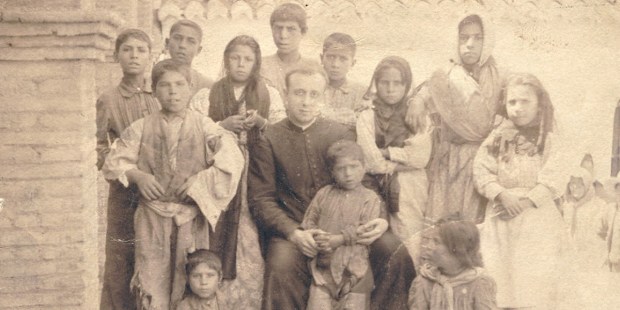 Eventually a victim of the Spanish Civil War, he spent his life fighting social ills such as illiteracy.

On December 3, 1874, Jose Poveda Montes stood by as his wife, Maria, gave birth to the first of their six children. They named him Pedro Jose Luis and he was baptized seven days later at Santa Maria Parish.

Pedro felt the calling to the priesthood at an early age. When he was 15, he entered the seminary in Jaen, Spain. However, when the Bishop of the Diocese of Gaudix offered him a scholarship to the seminary there, Pedro seized the opportunity. Having very little money he considered the opportunity a “gift from above.”  He was ordained to the priesthood on April 17, 1897, at age 23. He stayed at the seminary teaching and studying and received a theology degree in 1900.

Father Pedro’s affinity for the poor and downtrodden became apparent in 1902 when he was assigned to preach a Lenten mission to the “cave-dwellers” who lived in the hewn out rocks (sometimes called grottos) outside of Gaudix. Many were Romani and had very little. Father Pedro felt their pain and became determined to help them.

Read more: Read the story of the first gypsy woman to be beatified

He began by teaching catechism classes to the children. Then he moved closer to the caves so he could be closer to the people. Before long he had opened a school for boys and another for girls. He began traveling among the different parishes organizing St. Vincent de Paul Conferences to help with food and clothing and other necessities.

Father Pedro realized the importance of education and founded the Schools of the Sacred Heart for poor children. His popularity with the local cave-dwellers grew and they came to love their priest. They presented him with an album signed by the people of the area and paid for by money chipped in by the youth. The people named him the “Adoptive Son of Gaudix” and even named a street after him.

Amazingly, jealousy reared its ugly head and certain religious leaders refused to go along with Father Pedro’s “progressive” ideas. Bishop Maximiano del Rincon asked Father Pedro to leave the neighborhood of the Caves and Schools. The bishop then appointed him the canon of the Basilica of Covadonga.

At the end of the 19th century 68 percent of men and 79 percent of women in Spain were illiterate. Father Pedro began publishing articles on the proper ways to educate competent teachers. (His thoughts and writings at this time became the foundation for his founding of the Teresian Association).

In 1912 Father joined the Apostolic Union of Secular Priests, opened training centers and returned to the seminary at Jaen (where he began his studies) as spiritual director. In 1922 he was appointed to the Central Board against Illiteracy. He also  continued his work with the Teresian Association, which was named after St. Teresa of Avila.

Today the Teresian Association founded by Father Pedro Poveda is made up of lay people from around the world. Men and women of many cultures and nations have come together as Teresians to make Jesus’ presence known in the world. The association is present in 30 countries.

From the beginning of the 20th century and for the next 36 years Father Pedro Poveda never stopped working for Jesus through his beloved priesthood. From the beginnings with the “cave-dwellers” in Gaudix, to writing articles to advance education to fight the epidemic of illiteracy in Spain, to being founder of the Teresian Association, he kept on making his mark — all without any fanfare but quietly and simply out of love for the poor and needy and his Lord Jesus.

Unfortunately, dark winds of change were in the air. The new Spanish Constitution of 1931 had two articles in it that seriously affected religious freedoms. Secularism was taking hold at a feverish pace and priests, brothers, nuns and other were coming under attack. By 1936, with the rise of the “Red Terror,” street executions of religious people were commonplace.

Read more:
The saint who died rather than give up his rosary

And so it was for the kindly, caring priest who loved the poor and downtrodden. On Monday, July 27, 1936, paramilitaries came to Father Pedro’s house. He stood tall and said to them, “I am a priest of Jesus Christ.” The next morning Father Pedro’s body was found next to the chapel. He had been shot by firing squad for his faith and for the cause of Christian education. He was 61 years old.

Father Pedro was beatified at St. Peter’s Basilica on October 10, 1993, by John Paul II. He was also canonized a saint by John Paul II on May 4, 2003. His work continues to this very day in countries all around the world.

Read more:
Meet this master of disguises and defender of the faith