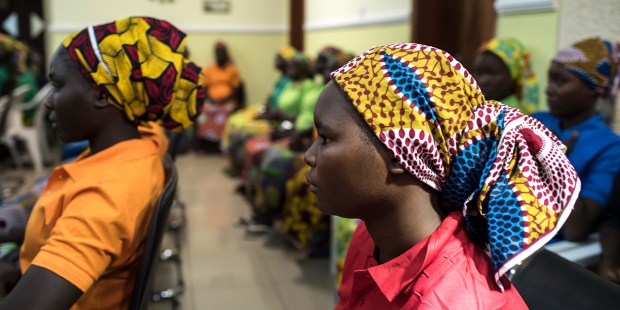 The Nigerian government announced the names of the released girls on the social media network.

Many families of the girls kidnapped from a school in Chibok, Nigeria, three years ago still have not heard whether their daughters were among the 82 the Nigerian government reported had been released.

Even though the government listed the names of the released girls on Twitter on Sunday, many families in Chibok do not have access to the social media network, the BBC reported.

According to the BBC report, the girls were said to have been handed over in exchange for five Boko Haram suspects after negotiations.

Esther Yabuku, whose daughter was kidnapped, told the BBC, “”Whether she is among the freed ones or not, I am very happy,” she said. “We started this year with 24 [returned girls] and now we have 106. It is a large number, and we have hope that, if they are alive, they will come back.”

Last October, 21 girls of the original 276 kidnapped were released. However, all 21 are still being held in a military reintegration program, according to the report. Last Christmas, their families had to go the house of a local politician to see them.

After their release, the girls were flown to the capital, Abuja, to meet with Nigerian President Muhammadu Buhari, who, the New York Times reported, has promised to secure freedom for all of the girls.

The Nigerian military has launched an aggressive campaign to shut down Boko Haram’s hold on the country. Large areas have been freed from the terrorist group’s control, and many of the group’s fighters have been killed or jailed, according to the New York Times.

The group, now scattered throughout the countryside, has resorted to suicide bombings, strapping explosives to young girls and children and sending them into crowded markets and refugee camps.

Family members and advocates of some of the girls who are still being held by Boko Haram are pushing for the release of the 100 girls held captive.

At a recent rally, they chanted, “Bring back our girls now and alive!” according to the Times report.