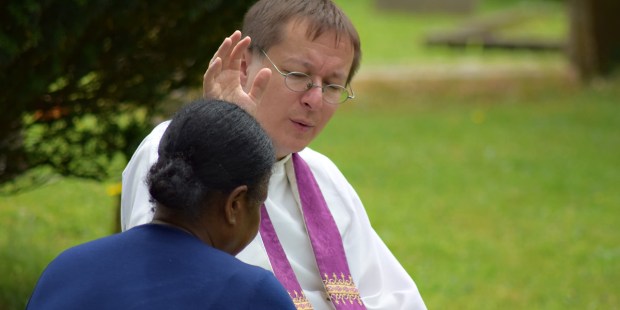 Have those face-to-face encounters at reconciliation lost the people who have intimacy issues?

Recently a friend in Texas talked about waiting in line for nearly an hour in order to make his confession, and I felt a tad jealous about it: first, for the local priests I know who sit in the confessional with a prayerbook, killing time as they wait for anyone to show up, and second for me, because I realized I have lost that sense of community and belonging and sheer commonality that came with seeing my own neighbors quietly examining their consciences while awaiting their turn (and knowing that they saw me, too).

There was, in fact, a bonding aspect to it all. If, as a kid, I was confessing smearing blackberries all over a friend’s willing face, his mother was likely getting ready to confess her screaming, nightmare-inducing reaction to her son’s purple and grinning visage. Having put it all where it properly belonged, into God’s keeping, and done a penance for it, we could all live together in peace for another week.

Times have changed, of course, and obviously as the number of Catholics practicing the faith has dropped off, the confessionals have emptied as well.

I’ve long thought that those face-to-face encounters at reconciliation rendered the sacrament inaccessible for people who have intimacy issues and who are not at all comfortable disclosing their sins while someone’s eyes are on them. I know people who simply will not go to confession unless they have a screen and a secure sense of privacy in which to do so, and I don’t judge them for it, because I had such issues once.

I have always known that there was nothing I could tell a priest that he had not heard before, but when the choice of a screened, anonymous confession was unavailable to me, I would still blanch at having to make my confession in a way that is so visual and visible — where I was not only seen, but could also see all the small, nonverbal tics and reactions of my confessor (who may not have realized that he rolled his eyes or seemed bored, disgusted or amused), all of which would throw me off. I’d see a facial expression that might have meant nothing more than the fact that my priest was hungry, and my thought process would churn up further insecurities about myself, my words and his judgments.

Weighting the pros-and-cons of anonymous confessions vs face-to-face, I gauge that absent the screen my confessions were rarely thorough, because I would become so distracted by my surroundings (“There is a box of tissues, there; does he make people cry?”) that I would hurry things along, just to get it done with.

Perhaps the advent of face-to-face confessions did have something to do with the (in my memory) abrupt end to those long lines of penitents. Would more people be showing up to reconcile themselves to heaven if they knew that — in most cases — face-to-face confession was optional, and that the screens between priest and penitent still exist? Are people fearfully depriving themselves of grace, and spiritual direction, simply because that message hasn’t filtered down?

We need the grace, and the spiritual direction, too.

The intimacy issue — the face-to-face bit — was why, for much of my life, I resisted the suggestion to find a spiritual director. If a simple confession could be so fraught with peril for me, how terrified might regular meetings with someone — perhaps not even a priest! — make me feel about being seen, and about being known? I had resisted for years.

That changed a few years ago, when I treated myself to a five-day retreat that emphasized Eucharistic Adoration. Fully spent, physically, emotionally and spiritually, I had entered the retreat vowing to do whatever I was told while there. I would eat what was put before me, read what was given me and simply let the Holy Spirit lead. Because God has a sense of humor, this ultimately meant I would make a three-and-a-half-hour general confession, face-to-face with a priest who had never done one before.

We were both flying blind, but in that long encounter I found myself able to dredge up painful episodes of my past in which I had failed, or where others had failed me, and the examination led to the confession of sins I had either forgotten about or failed to see properly as the sins they were.

The gentle, open exchange of thoughts, the spontaneous reminder of a scriptural passage, or a saint’s observations — part and parcel of good, Holy Spirit-led spiritual direction — finally brought me to a place of real healing and deliverance. Two hours or so into discussing faults and injuries I had held on to and nurtured for twenty-some years, I could literally feel their weight leave my chest, replaced by a new lightness that I recognized as grace.

It was a face-to-face moment with the miraculous, re-creative love of Christ, and fear had no place, there. Having worked so diligently to shepherd an injured sheep, my priest’s face was illuminated with what he’d had a part in. His was a face aglow.

And seeing that light was an affirmation of God’s love manifested in persona Christi that I needed and would have missed, had we used a screen.

Definitely one for the “pro” side of the argument.

All that said, I still like the screen. I still like the barrier that allows me to close my eyes and — as I did when I was a kid — take that disembodied voice as Christ’s own, without the human distractions.

But if the screen is unavailable (or the arthritic knees too unbending for it) I can face it. I can face the Face, in persona Christi.

Read more:
The day I met the devil in a dime store