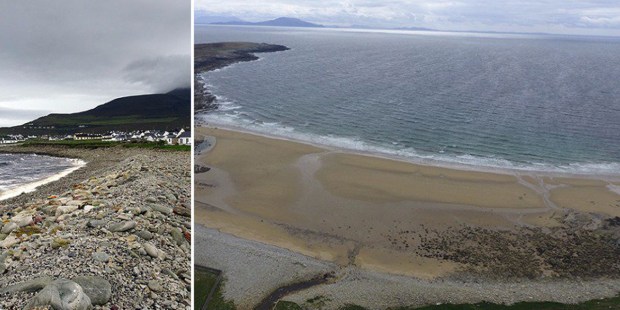 Freak tide brings back the sandy coastline (and the tourists).

In the words of Job, “The Lord gave and the Lord has taken away,” but in the case of this Irish beach, He gave it back again.

The sand at Dooagh, Achill Island, off the County Mayo coast, washed away more than 30 years ago, leaving a craggy, rocky coast. After a freak tide this April, the beach returned to its former glory, according to a report in The Guardian.

Sean Molloy of Achill Tourism told the Guardian that the locals were delighted to have their beach back.

“Some big storms destroyed the beach. It was completely washed away and 1984 was the last time the beach was there.

“Then in April we had that cold snap over Easter and the wind was coming from the north. It was steady and must have transported sand in from elsewhere,” said Molloy.

The return of the beach has already led to an increase in visitors to the remote island, according to the Guardian report.

The novelist Graham Greene visited the island in the late 1940s, according to the Irish Times, and is thought to have written parts of The Heart of the Matter and The Fallen Idol, along with some poetry, there. The actress Angela Lansbury played on the beach as a child in the 1930s, according to the the report.