Pope Francis: I’m going to Fatima to entrust the eternal fate of mankind to Mary

At the Wednesday audience, the pope asks for prayers for his upcoming pilgrimage to Fatima and speaks of Mary as the Mother of Hope.

VATICAN CITY — Mary is the “best of Mothers” who faithfully keeps the candle of hope burning in the darkness, Pope Francis said today, as he invited Christians to pray as he journeys to Fatima to “entrust to Our Lady the temporal and eternal fate of mankind.”

Continuing his series on Christian hope, at the Wednesday general audience, the pope turned to Mary, Mother of Hope.

Our Lady’s experience of motherhood models that of so many mothers in our world, the pope told an estimated 15,000 pilgrims gathered in St. Peter’s Square. Hers is a witness of courage in accepting her vocation and welcoming the new life entrusted to her.

“Still in the flower of youth … she responds with courage, even though she did not know the fate that awaited her,” he said.

Hers is also a witness of quiet yet trusting obedience to God’s will amid the trials of life. “Mary appears in the Gospels as a silent woman, who often did not understand everything that was happening around her, but she meditated on every word and event in her heart,” he said. 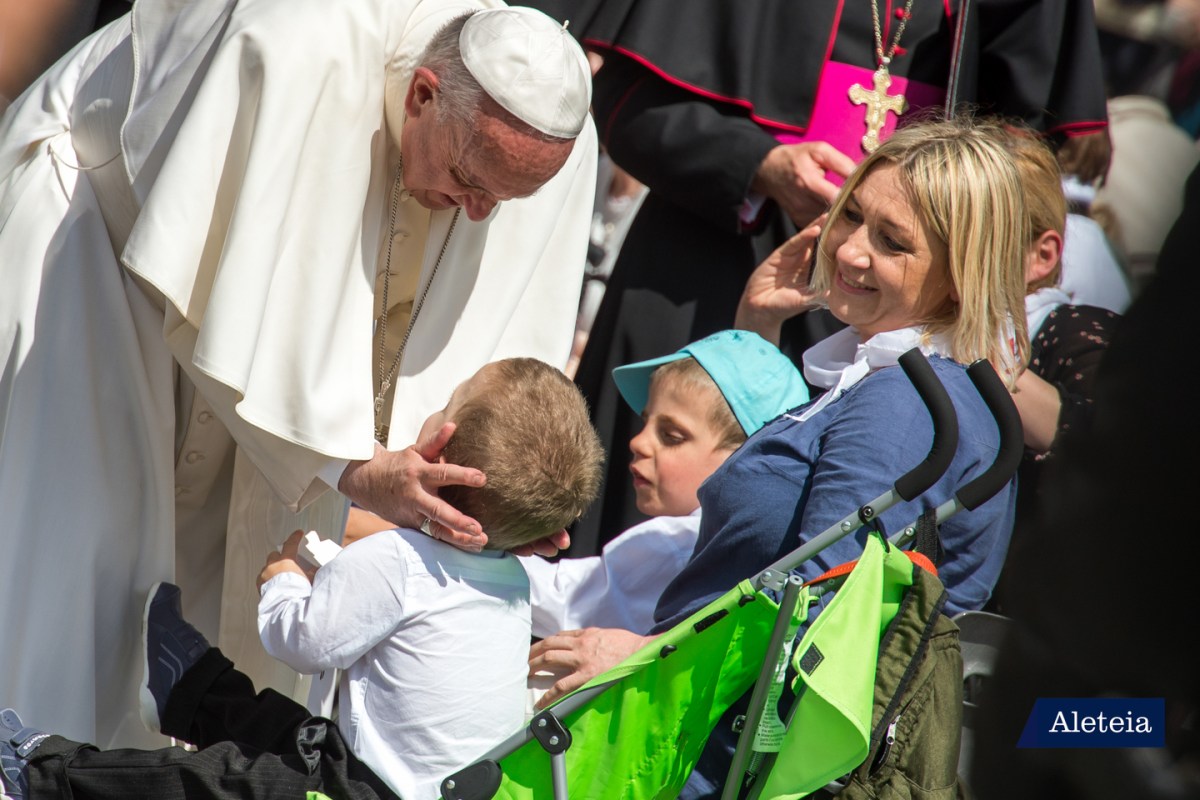 “In this disposition, there is a beautiful detail about Mary’s psychology: she is not a woman who gets depressed when faced with life’s uncertainties, especially when nothing seems to be going right. Nor is she a woman who protests with violence, who rails against what life dictates, often with a hostile face. Instead, she is a woman who listens: do not forget that there is always a great relationship between hope and listening, and Mary is a woman who listens. Mary welcomes life as it is given to us, with its happy days, but also with its tragedies that we would never want to encounter. Until Mary’s supreme night, when her Son is nailed to the wood of the Cross.”

The Gospels, Pope Francis observed, speak of a certain “eclipse” of Mary during the public ministry of Jesus. She follows her Son in silence, yet in his passion, when most of the disciples flee, she remains with him to the very end.

“Mothers do not betray, and in that moment, at the foot of the Cross, no one of us can say which was the crueler Passion: whether that of an innocent man who dies on the gibbet of the Cross, or the agony of a mother who witnesses the last moments of her Son’s life. The Gospels are laconic, and extremely discrete. They record the presence of the Mother with one simple word: she was ‘standing’ (Jn 19:25). She was standing. They say nothing of her reaction: if she was crying, if she was not crying … nothing; not even the stroke of a pen to describe her pain.”

Yet the image of Mary standing at the foot of the Cross has inspired artists and writers of every age to present her as a model of persevering hope in God’s promises, Pope Francis said.

“Mary was ‘standing’ in the thickest darkness, but she was ‘standing.’ She didn’t run away. Mary is there, faithfully present, every time a candle needs to be kept burning in a place of mist and fog. […] She is there in fidelity to the plan of God whose handmaiden she said she was on the first day of her vocation, but also because of her maternal instinct which simply suffers, every time a child goes through a passion. The suffering of mothers: we have all known strong women, who have faced their children’s suffering.”

Mary’s hope was the fruit of a life of prayer and daily effort to be conformed to God’s will, and was fulfilled in Jesus’ rising to new life, the pope said. In the Scriptures, we find Mary again at the birth of the Church at Pentecost. As the Mother of Hope, she was present with the disciples as they took their first steps into the world to proclaim the Gospel.

“This is why we love her as a Mother. We are not orphans: we have a Mother in heaven, who is the Holy Mother of God. Because she teaches us the virtue of waiting, even when everything seems meaningless. She always trusts in the mystery of God, even when He seems to be eclipsed by the evil of the world. In times of difficulty, may Mary, the Mother Jesus has given to us all, always support our steps. May she say to our hearts: “Get up. Look ahead. Look to the horizon. For she is the Mother of Hope.”

In his greetings to pilgrims following his catechesis, the pope made a special request, saying:

“Dear pilgrims, … this Friday and Saturday — God willing — I will travel as a pilgrim to Fatima, to entrust to Our Lady the temporal and eternal fate of mankind, and to pray for God’s blessings on its ways. I ask you all to join me, as pilgrims of hope and peace: may your praying hands continue to support mine. May the greatest and best of Mothers watch over each of you all of your days until eternity!”