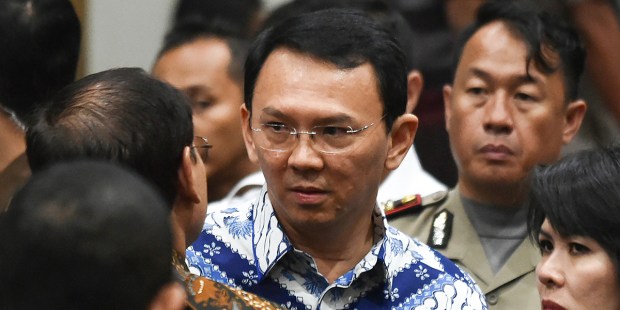 Bay Osmoyo | Pool | AFP
Jakarta's Christian governor Basuki Tjahaja Purnama (C), popularly known as Ahok, speaks to his lawyers after judges delivered their sentence during the verdict in his blasphemy trial in Jakarta on May 9, 2017.
Jakarta's Christian governor was jailed for two years on May 9 after being found guilty of committing blasphemy, capping a saga seen as a test of religious tolerance in the world's most populous Muslim-majority nation.
Share
Print
John Burger - published on 05/10/17

Case in Indonesia provokes worry that the moderate Islamic country may be changing.

Just weeks after a high-level report in the United States criticized two Asian nations for the prosecution of religious minorities for “blasphemy” against Islam, Indonesia and Pakistan have taken legal actions against two Christians, one of them the governor of Jakarta.

Basuki Tjahaja Purnama, the governor, was given a two-year jail sentence Tuesday after being found guilty of committing blasphemy, Agence France-Presse reported.

And in Pakistan, the blasphemy law was leveled against a Christian in Lahore named Zafar Bhatti.

In Jakarta, the trial of the governor was seen as a test of religious tolerance in Indonesia, the world’s most populous Muslim-majority nation, said the AFP report. The presiding judge, Dwiarso Budi Santiarto, told the Jakarta court that Basuki Tjahaja Purnama, who is popularly known as Ahok, was “convincingly guilty of committing blasphemy.” Purnama said he will appeal the conviction.

The report said that “Islamic hardliners” outside the court cheered and shouted Allahu akbar—”God is greatest”—as news of the verdict emerged.

The charges stem from last year, when Purnama is alleged to have insulted Islam while campaigning for re-election. The 2017 report of the U.S. Commission on International Religious Freedom explained:

The case originated in a September 2016 speech in which Ahok encouraged voters not to be dissuaded from voting for him in the February 2017 gubernatorial election because the Qur’an tells Muslims not to align with Christians or Jews.

NBC News said that an incorrectly subtitled video of his comments later went viral, helping to spark huge demonstrations that ultimately resulted in him being bought to trial.

Critics said the case against him was politically motivated. Purnama’s opinion poll lead shrank, and he lost the race last month to a Muslim challenger. The election result fueled fears that Indonesia’s moderate brand of Islam is coming under threat from increasingly influential radicals, AFP said.

Meanwhile, in Pakistan, where the mother Asia Bibi is still on death row in a six-year-old blasphemy case, a 2012 case ended in a sentence of life imprisonment for Zafar Bhatti of Lahore. A court in Rawalpindi sentenced the man May 3 for having sent text messages (sms) from his cell phone which insulted Islam, Fides news agency reported. Bhatti denied the charges and explained that the phone card had not been activated by him.

The Center for Legal Aid, Assistance and Settlement of Pakistan (CLAAS) has been providing free legal assistance to Bhatti and has decided to appeal the decision.

“Court judges continue to issue sentences in a superficial manner concerning people accused of blasphemy, postponing the responsibility to higher courts, without understanding how their decision heavily influences the lives of the accused and their families,” said Nasir Saeed, the head of CLAAS. “After a few years his case will be examined by the High Court, and until then he and his family will continue to suffer unjustly.”

Saeed said the blasphemy law is “constantly being … used to seek revenge regarding personal disputes.”

Recently, the National Assembly of Pakistan has approved a resolution calling for measures to prevent abuses of the law and the introduction of some safeguards. However, such demands have met strong opposition in Islamic movements and parties.

On a trip to the United States recently, the Catholic archbishop of Lahore, Archbishop Sebastian Shaw, said the blasphemy law is often misused by those who have ulterior motives, such as carrying out revenge or getting someone’s property, and that no one has ever been able to offer solid proof that a Christian in Pakistan has actually blasphemed Islam.