Did you know there was an angel at Fatima who taught the children prayers? 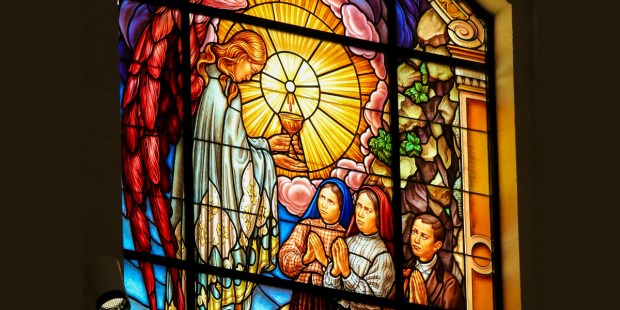 Jorisvo | Shutterstock
FATIMA, PORTUGAL: Stained Glass depicting a Vision of an angel by the shepherd children at the Sanctuary of Fatima in Portugal. Ecce Panis Angelorum means Behold the Bread of Angels
Share
Print
Patty Knap - published on 05/11/17

The prayer included in the Rosary is not the only one that came from the 1917 apparitions.

For years I’ve included a short prayer in between the decades of the Rosary, and just recently learned that this prayer originated at Fatima. On July 13, 1917, Our Lady asked the three shepherd children, Francisco, Jacinta, and Lucia, to recite it at the end of each decade of the Rosary. It’s commonly referred to as the Decade Prayer. It was approved for public use in 1930, and has since become a common (though optional) part of the rosary, said after each Glory Be at the end of each decade.

O my Jesus! Forgive us our sins, save us from the fires of hell. Lead all souls to heaven, especially those who are most in need of thy mercy.

Many people who know the basic story of Our Lady of Fatima are unaware that an angel, known as the Angel of Peace, appeared to the children three times before Our Lady visited them. The angel taught them the prayer commonly referred to as the Pardon Prayer. They were told to recite it three times in a row.

My God
I believe, I adore,
I hope and I love You!
I beg pardon for those
who do not believe
do not adore,
do not hope
and do not love You.

In the words of Sr. Lucia, one of the three Fatima visionaries: Kneeling on the ground, the Angel bowed until his/her forehead touched the ground, and had the children repeat these words three times. The Angel also said, “Pray thus. The Hearts of Jesus and Mary are attentive to the voice of your supplications.”

Another prayer the children were taught is commonly called The Angel’s Prayer:

Most Holy Trinity, Father, Son and Holy Spirit, I adore Thee profoundly.  I offer You the most precious Body, Blood, Soul and Divinity of Jesus Christ, present in all the tabernacles of the world, in reparation for the outrages, sacrileges and indifference with which He Himself is offended. And, through the infinite merits of His most Sacred Heart, and the Immaculate Heart of Mary, I beg of You the conversion of poor sinners.

Our Lady of Fatima told the children they should offer all their personal sacrifices to God by praying the Sacrifice Prayer:

Oh my Jesus, I offer this for love of Thee, for the conversion of sinners, and in reparation for the sins committed against the Immaculate Heart of Mary.

During the first apparition of Our Lady of Fatima, the children said they felt  “moved by an interior impulse,” as Lucia described it, to say the following prayer together. It’s called the Eucharistic Prayer:

Most Holy Trinity, I adore Thee! My God, my God, I love Thee in the Most Blessed Sacrament.

Read more:
The surprising connection between Our Lady of Fatima and Islam