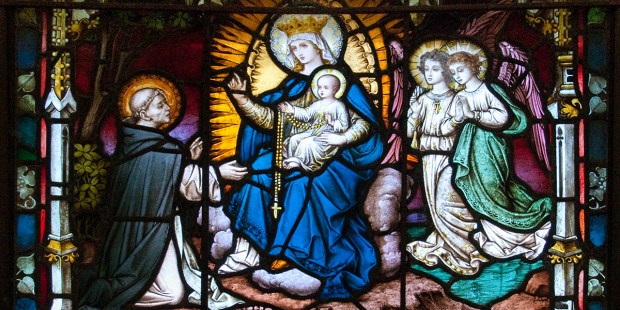 Andreas F. Borchert | Wikipedia
Carlow, County Carlow, Ireland Bottom feature of the left stained glass window in the north transept of Carlow Cathedral, showing how the rosary was given to St Dominic in an apparition by the Blessed Virgin Mary in the year 1214. Created by Franz Mayer & Co. in the 19th century. Franz Borgias Mayer (1848–1926)
Share
Print
Philip Kosloski | May 11, 2017

The Polish pope might have found inspiration in a saint he canonized the year before writing his encyclical.

When Catholics pray the Rosary, we are actually meditating on various events in the life of Jesus Christ while moving from bead to bead. These meditations are traditionally called “mysteries” and were first developed by Saint Dominic in 1214.

Originally Saint Dominic developed these mysteries as a catechetical method to teach those led astray by the Albigensian heresy. He grouped them into what is now known as the Joyful, Sorrowful and Glorious mysteries, seeking to immerse the Christian faithful into key moments in the life of Jesus.

When reflecting on these mysteries, Saint John Paul II considered a gap not covered by the three traditional groups. He wrote in 2002 in his encyclical Rosarium Virginis Mariae, “I believe, however, that to bring out fully the Christological depth of the Rosary it would be suitable to make an addition to the traditional pattern which, while left to the freedom of individuals and communities, could broaden it to include the mysteries of Christ’s public ministry between his Baptism and his Passion.”

John Paul II wanted the Rosary to become a “‘compendium of the Gospel,’” where it included “a meditation on certain particularly significant moments in his public ministry (the mysteries of light).” These were proposed as follows:

What’s interesting is that while he never stated publicly the source for this inspiration, a year earlier in 2001 John Paul II beatified Saint George Preca, a Carmelite priest from Malta. The Vatican biography notes how Preca, “In 1957 … suggested the use of five ‘Mysteries of Light’ for the private recitation of the Rosary.”

According to the Carmelites, Preca’s own division of the “Mysteries of Light” bears a remarkable similarity to John Paul II’s.

1) After Jesus was baptized in the Jordan, he was taken to the desert.
2) Jesus reveals himself as true God by word and miracles.
3) Jesus teaches the Beatitudes on the mountain.
4) Jesus is transfigured on the mountain.
5) Jesus takes his last supper with the Apostles.

John Paul II never revealed whether Saint George Peca inspired his decision, but what can be said is that both saints saw an opportunity to make the Rosary more fully reflect the life of Christ.

Additionally, while the introduction of the Luminous Mysteries of the Rosary has the weight of a papal endorsement, John Paul II also made it clear that what he was offering was not meant to be an imposition on personal devotion.

“This indication is not intended to limit a rightful freedom in personal and community prayer, where account needs to be taken of spiritual and pastoral needs and of the occurrence of particular liturgical celebrations which might call for suitable adaptations. What is really important is that the Rosary should always be seen and experienced as a path of contemplation.”

In the end, John Paul II wanted to further facilitate the prayer of individuals and breathe new life into a beloved tradition. He saw the Luminous Mysteries as a way for the faithful to enter more fully into Jesus’ life and an additional “doorway to the depths of the Heart of Christ, ocean of joy and of light, of suffering and of glory.”