Remnants of WWI discovered in Israel 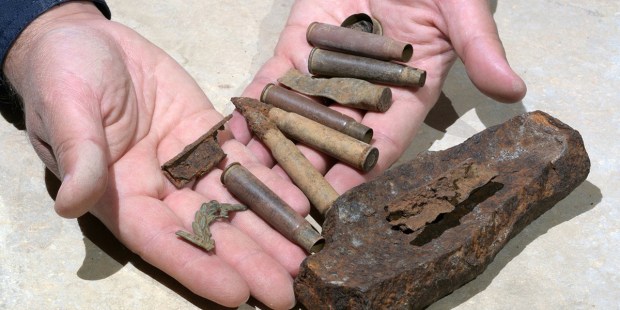 Remains of both the Ottoman and British armies found

A rare find in Israel: archaeologists have uncovered evidence of a great battle between the Ottomans and the British from WWI. Fox News reports:

Students of the Melach Ha-Aretz preparatory program who were part of an archaeological dig found rifle cartridges and shell fragments from World War I in an Israeli city.

The discovery came as a surprise to the team of archaeologists, who had been looking for artifacts from this ancient land. Livescience.com has more:

The artifacts were discovered completely by accident. Archaeologists from the Israel Antiquities Authority, along with student volunteers, were helping conduct excavations in advance of paving a road between two areas near Rosh Ha’Ayin when a student came upon one of the rifle cartridges.

After further excavation, the team found bullets, Ottoman rifle cartridges, numerous fragments of artillery shells and part of a British army cap bearing an insignia. The team also discovered the remains of two Ottoman military outposts, one near an agricultural field and another near an older tower.