A pope and a president … and Fatima! 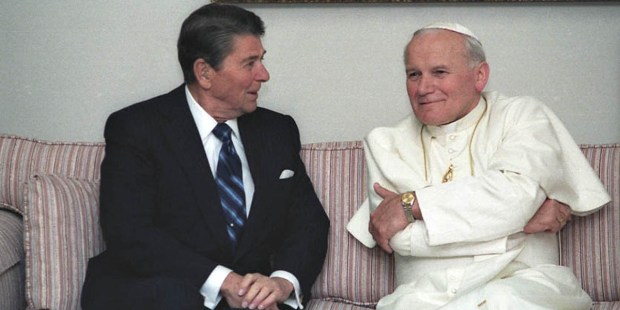 “[I]t does not seem too strong to say that Ronald Reagan had a high regard, respect, and fondness for the mother of Christ,” Paul Kengor writes in the new book A Pope and a President: John Paul, Ronald Reagan, and the Extraordinary Untold Story of the 20th Century. “She both intrigued him and appealed to him.” He would choose “Ave Maria” for his funeral plans and Kengor explains it was no surprise at all given “the influence of his Catholic father … his devotion to his own mother … the many Catholics on his staff … his pronounced mystical streak” and “his bond with the Marian pope, John Paul II,” among other things.

Other things — like his very own words. In a 1985 speech to lawmakers in Lisbon, President Reagan said:

No one has done more to remind the world of the truth of human dignity, as well as the truth that peace and justice begins with each of us, than the special man who came to Portugal a few years ago after a terrible attempt on his life. He came here to Fatima, the site of your great religious shrine, to fulfill his special devotion to Mary, to plead for forgiveness and compassion among men, to pray for peace and the recognition of human dignity throughout the world.

When I met Pope John Paul II a year ago in Alaska, I thanked him for his life and his apostolate. And I dared to suggest to him the example of men like himself and in the prayers of simple people everywhere, simple people like the children of Fatima, there resides more power than in all the great armies and statesmen of the world.

This, too, is something the Portuguese can teach the world. For your nation’s greatness, like that of any nation, is found in your people. It can be seen in their daily lives, in their communities and towns, and especially in those simple churches that dot your countryside and speak of a faith that justifies all of humanity’s claims to dignity, to freedom.

I would suggest to you that here is power, here is the final realization of life’s meaning and history’s purpose, and here is the foundation for a revolutionary idea—the idea that human beings have a right to determine their own destiny.

John Paul II’s life was spared that day when he was shot in St. Peter’s Square, he believed by the Blessed Mother herself. Reagan, who also believed his life had been spared for a purpose, understood the significance of Our Lady of Fatima not only to John Paul II but to his understanding of the Cold War, Kengor, a professor of political science  at Grove City College, argues. He talks a little about the pope and the president and Fatima here.

Kathryn Jean Lopez: To what extent is your book all about Mary? Is that Catholic wishful thinking about a Protestant president?

Paul Kengor: That’s an even further untold story, and what drew me in further. It’s not Catholic wishful thinking. It’s the historical-spiritual reality. If it’s not “all” about Mary, Mary is certainly a core element.

John Paul II was shot on the Feast Day of Our Lady of Fatima, May 13, 1981, which marked the date when three shepherd children in Portugal—two of which are now being canonized by Pope Francis—claimed to have experienced the first of several incredible apparitions of the Virgin Mary. This is one of the tiny sliver of alleged apparitions of Mary that the official Roman Catholic Church has certified as legitimate. The Lady made three predictions, which included, among other things, the rise of communism in Bolshevik Russia and how atheistic communism would globally spread its errors and crimes and persecute people generally and the religious specifically—including the pope. The dramatic “Third Secret of Fatima,” which was held in a vault in the Congregation for the Doctrine Faith for decades when John Paul II asked to read it on July 18, 1981, predicted a deadly attack on the pope. John Paul II concluded that that prediction applied to him. So did the sole survivor of the three shepherd children, Sister Lucia, who lived to the age of 97, and with whom John Paul II had a special relationship.

As for Reagan, he had long known about Fatima. Virtually everyone in the anti-communist movement of his generation knew about it. Reagan would’ve heard about it from numerous sources: his Catholic father or his devoutly Catholic brother or sister-in-law, or, gee, even from everyday things as commonplace as the major motion picture done on Fatima by Warner Brothers in 1952 (which was Reagan’s studio) when he was president of the Screen Actors Guild. But either way, he knew about it. I record in the book three people who told him about it or gave him information on it or even briefed him on it: his closest aide Bill Clark, his speechwriter Tony Dolan, and Frank Shakespeare, his second ambassador to the Vatican. Shakespeare told me about how he briefed Reagan on Fatima prior to Reagan’s second Vatican meeting with John Paul II in June 1987. That was a long one-on-one briefing in the airplane and in the car on the way to Rome.

I could say much more, but if you need any more proof of Reagan’s knowledge of Fatima, read the chapter in the book where he mentions John Paul II, Mary, Fatima, the “shrine” of Fatima, and the three shepherd children of Fatima in his May 9, 1985 speech in Portugal that got absolutely no press attention whatsoever at the time, and which I quote below.

What would have been Ronald Reagan’s understanding of the significance of Fatima?

The amazing idea, the stirring thought, the truly miraculous possibility that the mother of Jesus Christ would have appeared in a tiny village of Portugal in 1917 to warn the world about the coming deadly scourge of atheistic communism in the 20th century would have riveted Ronald Reagan. He always had a mystical streak anyway. He was very open to the supernatural. He would have connected all of it to the same Cold War struggle against the “Evil Empire” that he was waging—and that John Paul II was waging.

And to think that the Virgin Mary in 1917 could have been warning about the removal—the killing—of Reagan’s eventual Cold War partner in the Vatican in the 1980s? That surely grabbed Reagan. And then you need to add this to the mix, which I detail in the book at great length: Reagan suspected from the beginning that the Soviets might have ordered the shooting of John Paul II on May 13, 1981—on the Feast Day of Our Lady of Fatima.

So, how could Reagan not be intrigued? Gee, you don’t need to be a Catholic mystic to have your curiosity piqued by that. Reagan considered this very attentively. As Frank Shakespeare told me, Reagan listened to his words on Fatima that day in June 1987 “very intently.” Shakespeare told me: “he listened very, very carefully—very intently. He was very interested.”

Do we actually know that Pope John Paul II and the president ever talked about Fatima?

I can’t say with 100 percent absolute, unmistakable certainty because I lack a specific transcript of their private conversation—a clear smoking gun. The Vatican release of any such transcript will not be available until June 7, 2057. Seriously, I’m not kidding: June 7, 2057. I’ll be 90 years old then. If we’re still alive, Kathryn, I promise you a follow-up interview.

Frank Shakespeare, however, told me that they had to have discussed it, that Fatima “would have come up” and surely did come up. I said to Shakespeare: “Now, you can’t say for sure where and when and whether they [Reagan and John Paul II] had that conversation [on Fatima], but you believe it would had to have happened at some point?” Shakespeare answered: “Yes, that’s exactly right.”

Also, I was also told that John Paul II sought to get a book on Fatima to Reagan after their first June 1982 meeting. The conduit for this was the usual tandem of Bill Clark and Pio Laghi. (For the record, Bill Casey was the third leg of the Clark-Laghi-Casey troika.) I’m pretty sure I identified the exact Fatima book, which was one of three Fatima books I tracked down through the Reagan Library. I go through all of this carefully and candidly in the book, stating with great caution what I can and can’t say as a historian.

But do I think that the two of them discussed Fatima at some point? I would bet my house on it.