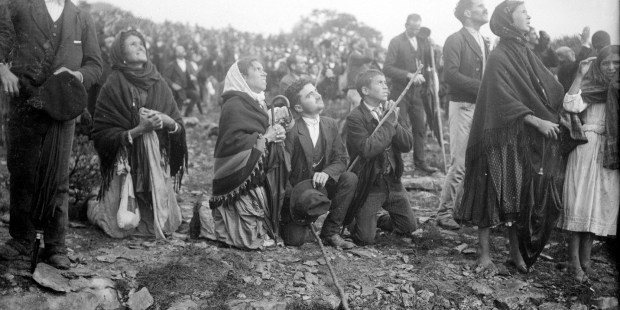 One of the Sisters ran to the relics, next to the tabernacle, and prayed, ‘Shepherds, save this child, who is a child like you!’”

The Brazilian parents of the boy whose miraculous healing led to Saturday’s canonization of two of the Fatima children spoke recently of what happened.

João and his wife Lucila Yurie spoke amidst tears at the Fatima Shrine during a press conference held in advance of the pope’s arrival. The two Fatima visionaries, Jacinta and Francisco, were canonized by Pope Francis on Saturday, the 100th anniversary of the apparitions at Fatima.

“His head hit the ground and he sustained a very serious injury, which caused a loss of brain tissue [damage],” Joao said. Barely alive, Lucas “was given medical care in our city, Juranda, and given the severity of his condition, he was transferred to the hospital in Campo Mourao, Parana. When we got there, Lucas was in a deep coma. His heart stopped twice, and they performed an emergency operation.”

The couple said it was right then that “we began to pray to Jesus and Our Lady of Fatima, to whom we have a great devotion,” Batista shared with Catholic News Agency.

“The next day we called the Carmelite convent of Campo Mouro to ask the sisters to pray for the boy,” he said. Due to the period of silence held by the religious community, the sisters did not receive the message.

Lucas’ condition deteriorated over the next few days, his father saud. On March 6, the doctors “told us that the chance of the boy surviving was low, and if he did survive, his recovery would be very slow,” and he would likely deal with “severe cognitive disabilities or even [remain] in a vegetative state.”

On March 7, Batista said, “we called the convent again.” This time, the prayer request was received by the sisters. “One of them ran to the relics of Blessed Francisco and Jacinta, which were next to the tabernacle, and felt the impulse to pray the following prayer: ‘Shepherds, save this child, who is a child like you’…she also persuaded the other sisters to pray to the little shepherds to intercede for him.”

“And so they did,” Batista said. “In the same way, all of us, the family, began to pray to the little shepherds, and two days later, on March 9, Lucas woke up and began to speak, even asking for his little sister.”

Lucas was moved from the ICU on March 11 and was discharged from the hospital a few days later.  Ever since, Lucas “has been completely well and has no symptoms or after effects,” the child’s father said. “He has the same intelligence (as he did before the accident), the same character, everything is the same.”

“The doctors, some of them non-believers, said that his recovery had no explanation.”

Lucas’ parents expressed gratitude to the doctors who cared for their son, and to the postulator of the canonization cause of the little shepherds, “for all the care given throughout this process.”

Most especially they thank God. “We thank God for the cure of Lucas and we know with all the faith we have in our hearts, that this miracle was obtained through the intercession of the little shepherds Francisco and Jacinta.”

“We feel a great joy because this is the miracle that leads to their canonization, but especially we feel the blessing of the friendship of these two children who helped our child and who now help our family,” Batista said.