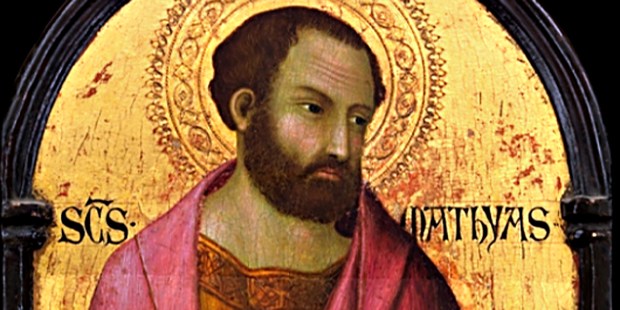 He wasn’t new to the merry band, but well known for his constant presence.

After the loss of Judas, it did not take long for the apostles to see they needed someone to take his place in their “merry band.” The Acts of the Apostles narrates what happened after the Ascension of Jesus.

[Peter said] “So one of the men who have accompanied us during all the time that the Lord Jesus went in and out among us, beginning from the baptism of John until the day when he was taken up from us—one of these men must become with us a witness to his resurrection.” And they put forward two, Joseph called Barsab′bas, who was surnamed Justus, and Matthi′as. And they prayed and said, “Lord, who knowest the hearts of all men, show which one of these two thou hast chosen to take the place in this ministry and apostleship from which Judas turned aside, to go to his own place.” And they cast lots for them, and the lot fell on Matthi′as; and he was enrolled with the eleven apostles.” (Acts 1:21-26)

From this account, we learn that Saint Matthias was an early disciple of Jesus who was there “from the baptism of John until the day” of the Ascension. It is traditionally believed he was one of the 70 disciples commissioned by Jesus and so the apostles knew him well. However, the rest of the New Testament is silent in regards to the apostolic endeavors of Saint Matthias.

Where did he go after becoming the “replacement” apostle?

A reliable tradition states that Matthias founded a church in Cappadocia and ministered to Christians on the coasts of the Caspian Sea. It is said a particular feature of his preaching was an appeal to personal mortification to purify oneself from the desires of the flesh. Saint Clement of Alexandria ascribes the following quote to Saint Matthias, “It behooves us to combat the flesh, and make use of it, without pampering it by unlawful gratifications. As to the soul, we must develop her power by faith and knowledge.”

It is believed that he died a martyr’s death, and was beheaded with an axe in Colchis at the hands of the many pagans there.

While little is known about his life, the appointment of Matthias as an apostle is the earliest evidence the Catholic Church has of Apostolic Succession, explaining why even today popes and bishops are chosen to replace those who went before them.

His life also reminds us that the twelve apostles were not the only ones who followed Jesus throughout his public ministry. There were many others, including a “Joseph” who almost became Judas’ replacement instead of Matthias. Jesus attracted a crowd of people wherever he went and some of them continued to follow him, while others left when his teachings were difficult. Matthias was one who gladly accepted Jesus’ teaching and was willing to be a “witness to his resurrection,” even if it cost him his life.