Where Dreher lost me on the “Benedict Option” 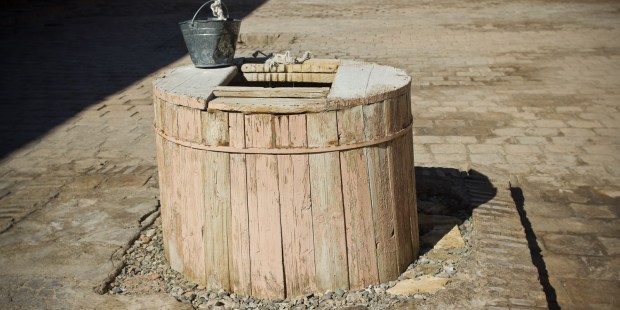 The future for Christians isn’t about an ark or a monastic wall. It’s about a well.

Like many Catholics who spend too much time reading, arguing and thinking online, I’ve recently gotten caught up in discussions of Rod Dreher’s best-selling book, The Benedict Option.

I have wanted to like Dreher’s arguments — I really have. I’ve lurked on his blog and read his interviews, hoping to see him flesh out his thoughts in directions that make sense to me. But, somehow, he always seems to miss the mark.

When I picked up Archbishop Chaput’s book, Strangers in a Strange Land, a few weeks ago, I started to understand where Dreher loses me. Chaput quotes heavily from the Letter to Diognetus, an early Christian work describing how Christians in the Roman Empire went about living as the leaven in the loaf. While both writers explore the post-Christian landscape, Chaput’s overall vision and hope seems to be very different from Dreher’s exclusivism, and a closer reflection of where our society is, and where the Church fits into the world.

For instance, Dreher has said, “I believe that Christians now have got to realize that we’re living in a post-Christian civilization and take measures to build a kind of ark for ourselves with which to ride out the dark ages, to hold onto our faith, and tender the faith for such a time as light returns and civilization wants to hear the gospel again.”

Here’s the problem: from a Catholic point of view, we already have a metaphorical Ark: The Church. We don’t need to build a new, more isolated ark to ride out what Dreher sees as a coming dark age. We can continue to live in the Ark we already have, as members of the body of Christ.

And this is where I must suggest that a “Benedict Option” that’s actually in line with Benedictine spirituality looks nothing like an Ark. Rather, it’s more like a well.

There’s only one big boat in the Bible, and once Noah comes ashore, God promises that he’ll never flood the Earth again, so the big boat is a one-off. Wells, however, the bible is full of, and they are continually important. In a land where people thirst, a well is sustenance and refreshment. They’re where big, memorable things happen, where narratives move forward, and where history changes.

In the Gospels, wells are literally a place where people encounter salvation.

For those of us trying to raise the next generation of Christians in a world that seems at best indifferent and at worse, hostile, it seems to me we need to dig into the depths and create wells — places where not only our families but travelers in the wilderness, can pause, be refreshed, drink deeply of good water, encounter the Christian community and, through them, hopefully Christ.

What would these modern wells look like in practice? Making our homes places of rest, common prayer, actionable faith, and joy; finding other families who want to build a Catholic culture, and spending time with them, just as, in an ancient village, people would gather near the well, helping and encouraging each other and drawing a bit of water for the stranger.

In practical terms we would, like St. Benedict, need to develop a habit of ora et labora (prayer and work) that is complementary, seamlessly lived, rather than in tension, comfortable enough to be lived in the open. When we build our family lives in this way, we’re digging good wells; we will have a source of constant refreshment, even if the overall culture experiences drought.

However, like Benedictines and like the ancient villagers of the Bible, we must recognize that the blessing of a ‘good well’ comes with great responsibility, because we are required to share. As Catholic communities, that means welcoming wanderers and strangers and letting them drink with us. Some of these wanderers may have been so thirsty, for so long, they cannot even gauge their need. Some may be so world-worn and weary that they will not be able to retain the good water — they might even vomit it out at first — but we are bound to offer again, and patiently, with gentleness.

Instead of withdrawing and keeping our water to ourselves, we can go out into the world and share it with crazy generosity, whether it comes in the form of our time, our companionship, or our prayers.

Jesus never promised us control. He compared us to salt and yeast, which are always minor ingredients in a recipe. Yeast sitting alone on a shelf dies. It’s only good when it’s mixed in among the dough. In the same way, Dreher’s temporary withdrawal is more likely to destroy faith rather than protect it.

We have Jesus’s assurance that the gates of Hell will never prevail against the Church. He didn’t say “Will never prevail as long as you know when to withdraw.” He said never prevail. We can walk fearlessly in this strange land where people think putting Church before children’s sports is crazy, or where being joyful about a fourth or fifth or eight child is ridiculed.

Diognetus was writing in a time much like ours, when fleeting pleasure and relative truths ruled the day and Christians seemed oddly out-of-sync with the empire around them. Yet, a few centuries later, there was something we could refer to as Christendom, and a robust Catholic culture. It didn’t come about because people retreated in a fit of pique, but because they lived among their pagan neighbors, and drew water joyfully from the well of their salvation.

Start digging your well. Pepper your neighborhood, your city, your county with little wells. Our culture thirsts for something better, and we can bring it to them.