How a heretic helped write the Apostle’s Creed 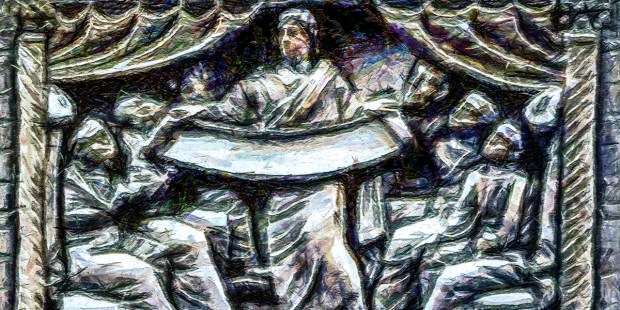 Marcion compelled the Church to consider her own scriptures and decide what belonged in those scriptures (and what did not).

Not really (I just picked the title for click bait), but heretical notions around Christ in the life of the early Church did compel orthodox Christians to sharpen their teaching, to sort through the competing contentions of who he was and what he did.

We see it early, in the account of the apostle Thomas. He doubted, remember? But when confronted with the crucified Christ, he declared my Lord and my God. “Lord” as a title of reverential respect was current among Jesus’ disciples. Yet Jesus is Lord became the Church’s earliest creedal affirmation, asserting a sense of divine lordship. But in the Gospel of John, Thomas took another step, adding and my God. The lordship of Jesus by extension is also God’s lordship. In the gospels, Thomas is the first to say it.

Thomas was no heretic, of course. His addition was a positive extension. But Marcion’s, his was a negative substraction.

A shipping merchant, Marcion ambled into Rome about the year 135. After dumping a boatload of money on the Church, he began teaching an alien gospel. (After being ejected from the Church around 144, the Church paid back every dime he’d given.)

To Marcion the God of the Hebrews was the antithesis of the God of Christ. The God of the Jews was cruel, unjust, plus the Jewish God was just very earthy. Earthy, for some people, was an icky attribute for anyone to lay on a real god.

Marcion’s theological solution said there must be two gods. One was superior and transcendent, spiritual; this is the God Jesus represented. Jesus was an emissary of the transcendent god, sent to snatch us from the Jewish God. The Jewish God, Marcion taught, was a lower god, really not much more than a hillbilly tribal deity. He was the one who made the earth and the things crawling over the earth. Christianity, by Marcion, owed nothing to the Jews and was completely inconsistent with Judaism.

Suppose, however, the question was: Do you believe in a creator of heaven and a creator of earth? This would argue for Marcion’s two gods.

Doing that incidentally meant Jesus was imitation flesh; he never died, and thus never needed anything as earthy, as fleshy as resurrection.

Marcion developed his own Bible, largely by eliminating all the Hebrew Scriptures while keeping ten of St. Paul’s letters, though edited, and by producing his own rendering of St. Luke’s gospel, again, edited, largely aimed at eliminating Jewish references.

1) Marcion compelled the Church to consider her own scriptures and decide what belonged in those scriptures (and what did not). Out of all the available alternative gospels and letters there were to sort through, the Church had to decide which best reflected the apostolic memory of Jesus as the Church knew it and taught it.

2) Marcion’s heresy obliged the Church to expand the Apostle’s Creed. Exactly what faith was it new Christians were getting themselves into when they sought baptism? The Apostle’s Creed, as I imagine it, organically grew to handle such questions arising from pastoral and theological needs.

The questions asked in our baptismal creed accordingly became more detailed, more specific, and more intentional, as did the answers. Which God is it you believe in? We believe in the God who made heaven and earth, the almighty who owes nothing to another.

This first article of the Apostle’s Creed declares, among other things, God made both heaven and earth. That means God made you. In Marcion’s depiction, you were made by an inferior god who really didn’t know what he was doing. But the Church says through our creed, you are not a mistake, not on this earth. The God declared in the creed makes stuff, you included, and he does it deliberately because he loves doing it and he loves what he makes.

Had Marcionism prevailed, we might not be saying that.