(Complete Text): What Pope Francis really said on Medjugorje, Trump, and the Lefebvrists 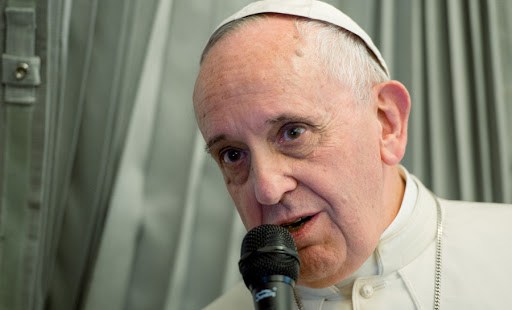 VATICAN CITY — What did Pope Francis really say about Medjugorje, President Donald Trump, and the Society of St. Pius X, during his inflight press conference on the return to Rome from Fatima?

As a service to our readers, here below Aleteia provides a translation of these three questions and answers, as they appear in the Vatican’s official transcript of the inflight press conference.

What did Pope Francis really say about Medjugorje?

Good evening, Your Holiness. I am asking you a question on behalf of the Italian group. Yesterday and today, in Fatima, we saw a great witness of popular piety together with you; the same [popular piety] one also finds, for example, at other Marian shrines like Medjugorje. What do you think of those apparitions — if they were apparitions — and of the religious fervor they have aroused, given that you have decided to appoint a bishop delegate for other pastoral aspects?

Medjugorje. All of the apparitions, or alleged apparitions, belong to the private sphere; they are not part of the ordinary public Magisterium of the Church. Medjugorje: a commission headed by Cardinal Ruini was established. Benedict XVI established it. At the end of the 2013 or the beginning of 2014, I received the results [of the commission] from Cardinal Ruini. It is a commission of good theologians, bishops and cardinals. Good, good, very capable. The Ruini-report is very, very good. Then, there were some doubts in the Congregation for the Doctrine of the Faith, and the Congregation judged it appopriate to send all of the documentation to each of the members of the congress of the “feria quarta” [a meeting held each Wednesday in the CDF], even the things that seemed to be against the Ruini-report.

I received the notification: I remember it was a Saturday evening, late evening. It did not seem right to me: it was like auctioning off — I apologize for the word — the Ruini-report, which was very well done. And on Sunday morning, the Prefect of the Congregation for the Doctrine of the Faith received a letter from me asking him to say that, instead of sending [everything] to the “feria quarta,” the opinions should be sent to me, personally.

These opinions were studied, and all of them underline the thoroughness of the Ruini-report. Yes, mainly there are three things to distinguish. Regarding the first apparitions, when [the “visionaries”] were young: the report more or less says that we need to continue to investigate. On the alleged current apparitions, the reports has its doubts. I personally am more “naughty”: I prefer Our Lady as mother, our mother, and not Our Lady as head of the telegraph office who sends a message every day at a certain hour … this is not the mother of Jesus. And these alleged apparitions do not have much value. And I say this as my own personal opinion. But who thinks that Our Lady says: “Come and tomorrow, at this hour, I will give a message to that visionary”; no. [In the Ruini-report] a distinction is made between the two apparitions. And third, the true heart of the Ruini-report: the spiritual aspect, the pastoral aspect, people who go there and convert, people who encounter God, who change their lives … There is no magic wand for this, and one cannot deny this spiritual-pastoral aspect.

Now, in order to look at these things with all of this information, with the responses that the theologians sent to me, this bishop [delegate] was appointed — he is very good because he has experience — to see how the pastoral part is going. And ultimately, something will be said.