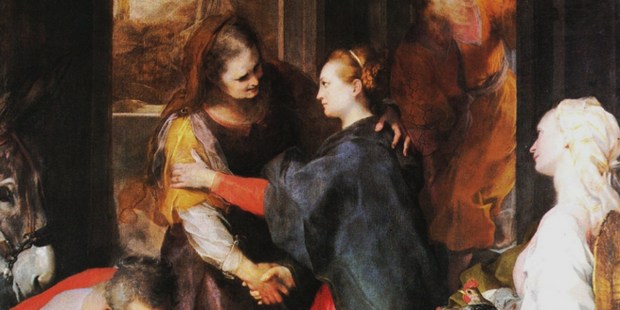 When the practice of making pilgrimage was called into question during the reformation, art came to its defense, beautifully.

Is there anything more compelling than a journey made for love? A surprise visit home for holidays, a suitor arriving out of the blue on bended knee, Odysseus struggling nine long years to return to Penelope—these capture the imagination and warm the heart. Pilgrimage is the ultimate journey of love, at the cost of time, expense and inevitable discomfort. While many religions promoted pilgrimage, Christians gave it a special stamp of their own. From the moment Jesus exhorted his apostles to “Go and make disciples of all nations” (Mt 28:19), Christians have traveled the world not only to spread the Gospel but also to visit the sites where the story of salvation unfolded and where great saints bore witness to Truth.

The hardship of pilgrimage—long treks on foot, danger of disease, and the threat of brigands—made the activity a popular penance, a true gesture of atonement in making a journey for the love of Christ.

During the Reformation, however, the practice of pilgrimage was called into question by Martin Luther, who scoffed that pilgrims were rarely motivated for the “right” reasons.

Those who make pilgrimages do so for many reasons, very seldom for legitimate ones. The first reason for making pilgrimages is the most common of all, namely, the curiosity to see and hear strange and unknown things. This levity proceeds from a loathing for and boredom with the worship services, which have been neglected in the pilgrims’ own church.

The Catholic Church championed the tradition of pilgrimage in the final session of the Council of Trent and after a long period of diminished visitors to Rome, the Holy Years began to see the streets once again swell with pilgrims. In 1550, St. Philip Neri opened a hospice for pilgrims, which would became the church of Trinità dei Pellegrini, where he and his volunteers cared for no fewer than 140,000 pilgrims in 1575. St. Philip also began a tradition for locals to make a pilgrimage to seven churches throughout the city of Rome, a custom that lives on to this day.

One of Philip Neri’s favorite paintings, a stone’s throw from his tomb in Chiesa Nuova, represents a very special pilgrimage. Federico Barocci’s Visitation, painted in 1586, shows Mary hurrying to Elizabeth immediately after Gabriel tells her she will become the Mother of God. Elizabeth, too, is pregnant with John the Baptist and Mary races to bring divine love to her cousin.

Barocci entices the viewer into the story with the leaning figure of Joseph reaching to pull up an opaque sack filled with bread and a metal ewer of wine. It appears that he is gathering these gifts from the liturgical space of the altar. On the right, a servant girl in a fetching color combination of lemon yellow, rose and olive green, climbs the stair holding a gift of two birds. Her straw hat and the woven basket have a high definition quality that makes the scene appear crisply real.

Mary, a glorious example of humility, climbs the stairs towards her cousin who waits in an archway as Zechariah leans in from the semi darkness. Barocci’s strength was always color, able to both delight and awaken the senses. Mary is accompanied by bright shades as she brings the Light into the world, but where Elizabeth lives, there is merely murky darkness. As Mary touches Elizabeth’s arm, the first splash of brilliant hues spreads along the sleeve, as “the baby leaped in her womb, and Elizabeth was filled with the Holy Spirit” (Lk 1:41). The joyful color that Barocci infused in the painting deeply affected St. Philip, who experienced one of his visions before the work.