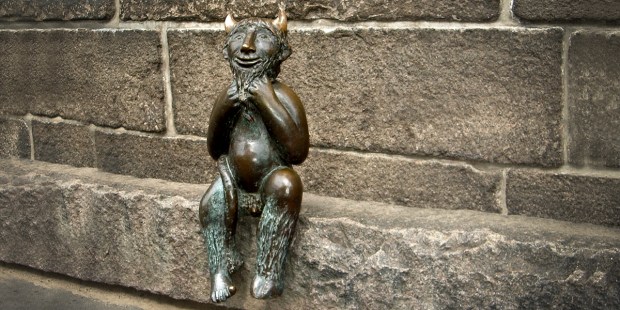 A Gothic church in Germany was supposed to be a wine bar. At least, that’s what the devil thought it would be.

German architects and builders, it seems, enjoy tricking the devil over and over. Munich’s Frauenkirche, for instance, is well known for its “devil’s footprint”–you can read everything about it here–the place in which the devil stood after realizing he had been tricked by the architect of the church, clever Jörg Von Halsbach. But St. Mary’s church, in Lübeck, also has a story of its own involving the devil, a church and its builders.

Legend claims when the great Gothic church of St. Mary was being built, the devil paid a visit to the workers and asked them what were they building. Being too afraid to tell him the truth, knowing it would upset him, they instead said they were building the greatest wine bar ever. The devil was so happy to hear that, that he decided to help them build it himself.

Read more:
The day the architect of a church tricked the devil

However, as the church was nearly finished, the devil soon realized he had been tricked all the way. Filled with devilish rage, he picked up a large stone, intending to throw it against the church. One of the builders stood up and promised him they would indeed build a tavern right across the church. The devil accepted the deal and laid down the slab where it was. One can still see nowadays some marks on the slab, allegedly being the markings of the devil’s claws. A small bronze statue now greets those who pass by, whether they be on their way to church or to, indeed, the Ratskeller tavern, right across the street.