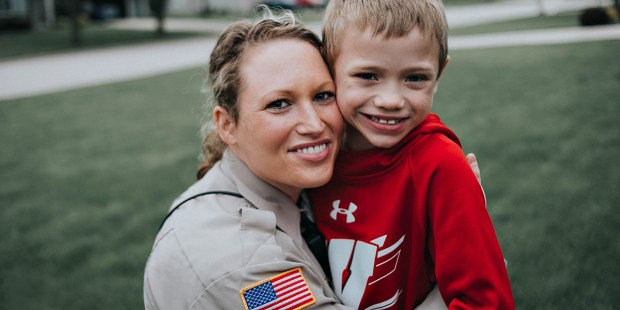 “If this were my child, I would hope every other mother would step in and help.”

As a parent, when the police knock on your door, you expect the worst. Thoughts of what trouble your child could have possibly gotten into for the police to get involved rush through your head. The last thing you’d think is that one of the police officers is going to end your months of worry and stress by volunteering to be your son’s kidney donor. But that’s exactly what police officer Lindsey Bittorf told Kristi Goll and her son Jackson when she visited their home in Wisconsin.

Read more:
After social media saved her husband’s life, she uses it to save others

The story started last December, when Jackson’s mom posted an update on her Facebook page. Jackson had just gone through a routine check up for his kidneys, and doctors had bad news. Jackson’s kidney function was decreasing and his name was going to be put on a deceased donor list so he could get a new kidney. But the doctors told Kristi that the best possible solution for her son’s failing kidney would be a donation from a living donor. So she decided to do what seemed like the impossible — ask someone to donate their working kidney to help her son.

Lindsey, a fellow mom working as a police officer, saw the post on Facebook and knew she had to do something. “If this were my child, I would hope every other mother would step in and help,” she told the transplant program. So after confirming her blood type was a match, Lindsey couldn’t wait to go surprise the family and give them the best possible gift that they could ever ask for.

Lindsey made a plaque that she gave Jackson when he opened the door. It read, “Jackson, I took an oath to serve and protect my community. My kidney will now be able to serve and protect you. I am your kidney donor!” The Goll family couldn’t be happier or more grateful that the search for Jackson’s kidney donor is over. Lindsey’s selfless, generous gift not only gave Jackson a new chance at life, but also gave Kristi the incredible gift of relief. She doesn’t have to worry about her son anymore.

Lindsey and Jackson’s story is a breath of fresh air, especially when it seems all we hear is sad and depressing news. Since their story was posted on the on the LoveWhatMatters Facebook page, it has been shared 402,000 times, warming hearts of fellow parents and giving hope to readers waiting for organ donations for themselves or loved ones. Let’s keep the prayers coming — both Jackson and Lindsey need our thoughts and prayers for a speedy recovery after their surgery, scheduled for late June!