Our Lady of Fatima, and a theological reading of history 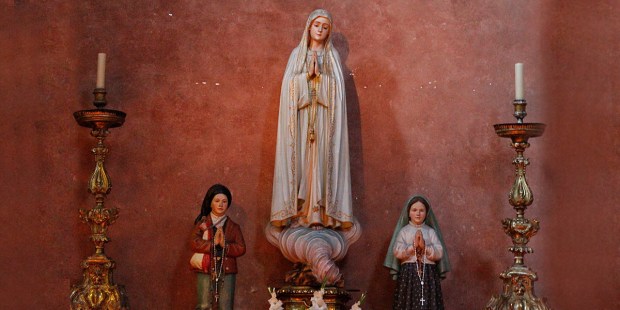 Look to Fatima to understand the 20th century.

This past week, we celebrated the 100th anniversary of the first apparition of Our Lady to a group of shepherd children near the Portuguese town of Fatima. The series of Fatima appearances—lasting from May until October of 1917—is one of the most extraordinary in the history of the Church. It has also beguiled political and cultural commentators outside the ambit of the Church, and it is this wider implication that I would like to explore.

This particular visitation of Mary took place at the height of the First World War, which signaled the end of Enlightenment confidence in the perfectibility of the human being, and in the year of the Bolshevik Revolution, which would exert, for most of the 20th century, a massively deleterious influence. To the simple children, who barely understood what she was saying, Our Lady announced that the Great War would soon end, and she also called for the consecration of Russia to her Immaculate Heart. Furthermore, she urged the children to pray for the conversion of Russia, which was a mysterious exhortation, given that, at the time of this communication, the Communist revolution in that country had not yet taken place.

And the confirmation of the veracity of the Fatima appearances is one of the most stunning and widely-attested miracles in the history of Christianity. In the afternoon of October 13, 1917, approximately 70,000 people had gathered at the apparition site in order to witness what the Lady had promised would be a marvelous sign. Among this throng were many secularists and skeptics who had come only to scoff. But before the eyes of 70,000 people, the sun commenced to “dance,” turning and dashing from place to place in the sky and finally appearing to plummet toward the earth. Some of the most astounding accounts of this incident were composed by journalists of an agnostic or atheist persuasion.

So what does the message of Our Lady of Fatima, considered in the widest sense, imply? It implies that the God of the Bible is a living God, by which I mean, a God who involves himself as an actor in human history. From the 17th century on, in the West at any rate, a casual Deism has held sway in the minds of many who profess faith in God. By this I mean the belief that God is a distant power, who established the laws of nature and set things in motion, but who remains aloof from the ordinary affairs of the world. But this view is repugnant to the biblical conception of God. According to the Scriptures, God indeed created the universe and established its laws, but he also exercises a personal and providential care for all that he has made. Jesus expressed this idea both precisely and poetically: “Not a single sparrow can fall to the ground without your heavenly Father knowing it.” Throughout the historical books of the Old Testament, we find events unfolding according to recognizable dynamics economic, political, and psychological, but through it all, under it all, God is also acting, mysteriously accomplishing his will.

This way of reading history was bequeathed from the biblical authors to the great tradition, and thus we find theological masters from Augustine to Robert Bellarmine to John Henry Newman interpreting world affairs through the prism of God’s providence. Augustine’s City of God, written in the wake of the sack of Rome, is particularly instructive in this regard. The great saint certainly understood the political, military, and cultural dynamics that contributed to the disaster, but he was especially sensitive to the sacred dimension of the event. The fall of Rome was ingredient, he argued across more than a thousand pages, in a divine providential plan that stretches from beginning to end of history. Kings, emperors, generals, soldiers, and writers made their moves, but underneath them all, God was making his moves and accomplishing his purpose. I will readily grant that the sifting of this providential design can be a dicey business, subject to various types of distortion and wishful thinking, but I will insist that abandoning the effort altogether is to surrender to a reading of history and a theology of God that are at odds with the Bible.

In our own time, no one played the Augustinian role of theological interpreter of history more effectively than St. John Paul II. Having personally experienced the tyranny of two of the worst and most abusive dictatorships in human history, Karol Wojtyla could nevertheless, upon assuming the papal office, tell the world “to be not afraid.” If we were reading things through purely economic or political lenses, such a recommendation would appear foolish at best, delusional at worst. But because John Paul read things theologically, he knew that mercy and love finally triumph, and he understood that any proposal for human flourishing that did not include God would necessarily fall victim to its own internal contradictions. This latter conviction sustained his non-violent but massively effective assault upon Communism from 1979 to 1989.

And his theological reading of history enabled him to grasp that Our Lady of Fatima’s summons to pray for the conversion of Russia was far from a pious fantasy, that in point of fact, it provides the interpretive key for understanding perhaps the pivotal event in the history of the late 20th century.